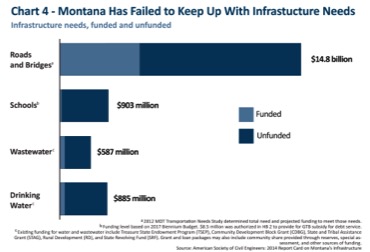 A few weeks ago, the Montana Budget and Policy Center released its new report – The Montana We Could Be. The report details how the income tax cuts passed in 2003, which largely benefited wealthiest households – has resulted in millions in lost revenue. This revenue could have gone to targeted investments into our communities. One area of focus is the ongoing needs in infrastructure – maintaining roads and bridges, water systems, and quality schools. As shown in the chart, the needs far exceed current levels of funding. Last session, the legislature

As another school year is about to start, several long-time teachers – residing in three Montana communities – highlighted the need for investments in education, including school facilities. Teachers across Montana do an incredible job each day ensuring that our children are given the opportunity to succeed in this state. But too often, educators are faced with teaching our next generations in facilities that fail to provide the 21st Century learning environment that our children need to succeed in today’s world. Even worse – basic maintenance issues continue to stack up – leaking roofs, impaired heating systems, and electrical problems. More than two-thirds of Montana’s schools were constructed before 1970, and a report from 2008 shows overall deferred maintenance needs exceeds $900 million.

We can and should do better. As our report and yesterday’s op-ed highlights, Montana is faced with a tight budget, in part, due to tax cuts put in place over a decade ago. These tax cuts – billed as a way to grow the economy – resulted in deep tax cuts for the wealthiest households, while the vast majority of Montana families saw little or no benefit. Over the past decade, these tax cuts have cost the state nearly $1 billion in lost revenue – revenue that could have been invested in our children and our communities.

Meanwhile, local cities and towns – and local property taxpayers – are left holding the bag to ensure our neighborhoods and schools can thrive. While state K-12 funding has increased over the past two decades, property tax revenue used to pay for education has increased at a much greater rate.

Over the years, Montana families and our communities have stepped up to ensure our children can succeed. We know our entire state moves forward when we have a quality educational system. However, we also must ensure everyone is paying their fair share and carrying their weight. It is time to reform our tax system to ensure the wealthy are paying their fair share, so that we can invest in a brighter future for Montana.