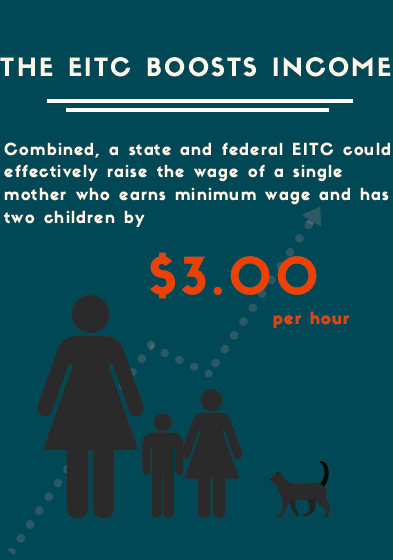 It’s EITC Awareness Day! We’ve talked in the past about how the federal credit is one of the best anti-poverty programs to date, and how a state EITC can further build Montana families’ financial security. It’s been a while since we posted on the topic so in case you’ve forgotten why the EITC matters for Montana, let’s revisit the highlights:

The federal EITC was established in 1975 and has consistently received bi-partisan support because it has proven to be one of the most effective ways to reduce poverty.

In 2013, the federal EITC lifted over 9 million people out of poverty nationwide, including 6 million children. The EITC’s success centers on its ability to reward work. The refundable credit offsets the amount workers owe in federal taxes. If a worker’s credit exceeds the amount he or she owes, the individual receives a refund, which for many families, helps cover basics like utilities, or pays for auto repairs so they have a reliable way to get to work.

The federal credit not only supports working parents, but research shows that it also benefits the next generation. When parents have more income to cover things like doctor visits or provide breakfast each morning, children do better in school. And a stronger start in life sets children up to do well later on.

Children who move out of poverty early on are more likely to graduate from high school, attend college, and have higher future earnings. Frankly, the EITC is the best way to lift children out of poverty, period. Without it, the number of children living in poverty would be 25% higher than it is today.

Finally, because the federal EITC makes work pay, families have more money to spend at their local businesses, which strengthens the economy overall. In fact, in 2012, the federal EITC put about $170 million dollars back into Montana’s local communities.

In 2012, 85,000 Montana families received the federal credit and almost two-thirds of these families lived in rural areas. Boosting family income is especially important because Montana is one of the few states that impose income taxes on people living in poverty.

Consider this. In Montana, a single mother with two children who works full-time and earns minimum wage is living in poverty. Creating a state EITC and combining it with a federal EITC would effectively raise her wage by $3.00 per hour.

Legislators can bring Montana in line with the 26 other states that have chosen to support working-class families by creating a state EITC. When working families thrive, we all do.

Learn about the federal EITC, if you qualify for the credit, and how much you could get back this tax season. And continue to follow our blog throughout this tax season to learn more.