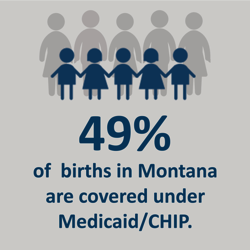 Federal funding for the Children’s Health Insurance Program (CHIP), which covers tens of thousands of children in Montana, expired on September 30, 2017. Unless Congress acts soon to extend this funding, the state of Montana will soon need to make tough decisions on how to maintain this critical coverage for Montana children. And it won’t be cheap.

Earlier this year, Senators Orrin Hatch and Ron Wyden (the Finance Committee’s chairman and ranking Democrat) actually worked out a bipartisan agreement to extend federal CHIP funding through fiscal year 2022. But the last ditch effort to repeal the Affordable Care Act (Graham-Cassidy bill) derailed efforts to extend federal funding for CHIP. The consequences of this delay will hurt our state and our children. Montana is set to exhaust CHIP funds within the first three months of 2018. It could happen as early as January.

Second, states with separate CHIP coverage would not be required to maintain this coverage if federal funding ends – putting coverage in danger for thousands of Montana children. Unless Congress acts soon, over 23,000 kids in Montana are at risk of losing coverage as the federal funding runs out in early 2018.

Montana, like most states, assumed continued federal funding in the state budget, as well as the continued ACA enhanced match. Our state will be left with even fewer federal dollars and Montana is already facing an enormous budget crisis. Without federal funding, Montana would face increased budget pressure, children would lose coverage, and implementation of program changes could result in increased costs and administrative burden for states as well as confusion for families.

If states close enrollment and/or end separate CHIP programs, some children could shift to parents’ employer-sponsored plans or Marketplace plans, but others would lose insurance altogether. Previously, some states closed enrollment in CHIP for limited periods in response to state budget pressures, and studies show that this led to coverage losses, left eligible individuals without access to coverage, and had negative effects on health and family finances.

If Congress does not act quickly to preserve children’s health care, Montana’s elected officials and families will be forced to make difficult and painful decisions. For more details on the importance of CHIP in Montana, check out our fact sheet: Montana Families Rely on the Children’s Health Insurance Program.