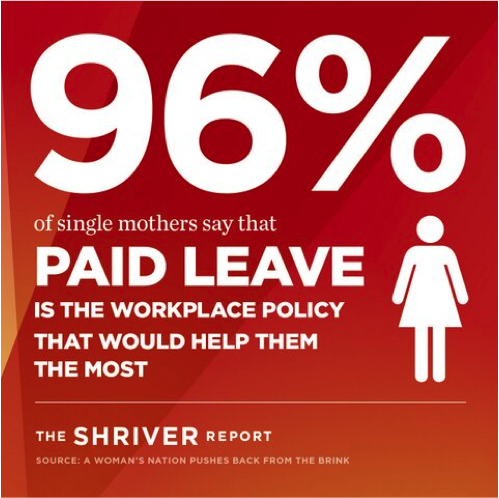 Yesterday, President Obama convened a group of big thinkers to discuss the state of working families in the U.S.  Did you know that 63 percent of children in the U.S. live in families where all parents work? A report released this week shows that of workers with the lowest wages only half are provided some form of paid leave time. This compares to 83 percent of higher income workers.  This means that when a child gets sick or an emergency comes up, many families are forced with a difficult choice of losing much-needed income (or even risk losing their job) or sacrificing the health of their loved ones.

Those without access to paid leave are also often the same families that are least able to afford reliable, quality child care.  (Check out our report on this issue too.) Often these parents are forced to give up pay to stay home with a sick child.  In a recent poll in conjunction with the Shriver Report, 96 percent of single mothers said that paid leave at their workplace would help the most.

The lack of paid leave time for working families hurts our economy.  About 30 percent of private-sector employees taking unpaid leave will incur new debt as a result of this leave. More debt means families have less money to spend in the local economy.

As the new study shows, there is growing evidence that implementing paid leave policies benefit families without imposing a cost on business. A survey of over 250 businesses with paid leave “found the vast majority – over ninety percent – reported either positive or no noticeable effect on profitability, turnover, and morale.”

Policies that support working families, including paid leave and expanding access to quality, affordable pre-K programs, is a win-win for our children and families and Montana’s economy.