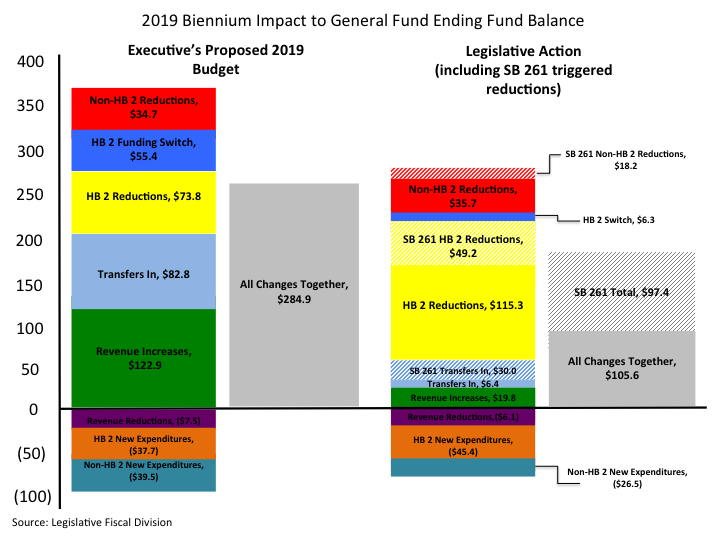 Yesterday, the governor’s office announced that the state could be facing more budgetary cuts in the coming months. Montana law requires the executive branch to ensure the state’s ending fund balance, or Montana’s rainy day fund, is kept at a certain level. With revenue levels down, the governor’s budget office has stated that the projected ending fund balance is now likely below that minimum amount.

We will be digging through more details over the coming days to examine the impacts of further cuts. First, we want to take a step back because it’s important to remember that any cuts considered now will be on top of the nearly $220 million in general fund cuts that were already taken through legislative action earlier this year.

In the chart below we’ve contrasted the governor’s proposed budget with the actual budget, determined through legislative actions. In advance of the session, the governor’s budget proposed a balanced approach that included cuts, as well as tax fairness measures, to bring the ending fund balance back up to $300 million. These tax fairness measures would have ensured out-of-state corporations and the super wealthy are paying their fair share and included a long-overdue increase to the tobacco tax.  The bar chart on the left shows the components of governor’s proposed budget, including the proposed cuts (in red and yellow) and proposed new revenue (in green). (Items below the black line are new spending or expenditure proposals that would lower the ending fund balance.)

The bar chart on the right shows the budget crafted by the legislature. In total, through both the 2017 session and the further cuts triggered in SB 261, the legislature has cut over $220 million in general fund investments. These included cuts to health services for our most vulnerable Montanans and cuts to investments in higher education that will result in higher tuition for many Montana families. (The legislature also passed new spending proposals, also reflected in the boxes below the black line.)

While more cuts seem inevitable, we cannot continue to ask Montana families and communities to bear the brunt of these difficult times. The state had multiple opportunities to raise needed revenue to stave off these devastating cuts. Now is the time for policymakers to work together to revisit the need for more revenue.