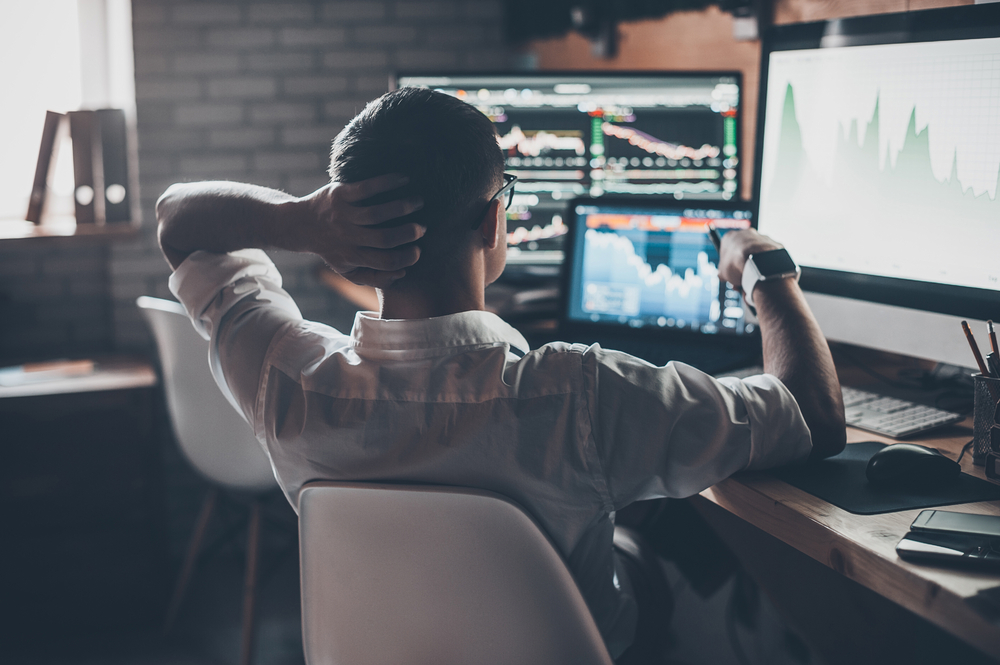 In 2003, the Montana Legislature passed a capital gains tax credit that benefits a very narrow portion of our population at the great expense of our collective ability to adequately invest in public programs, from education to health care. Currently, Montana is one of just nine states offering a significant tax break for capital gains income.[1] Since 2003, this tax break has proven to be unaffordable, unfair to working-class Montanans, and has not helped the economy. In fact, the tax credit costs the state tens of millions of dollars in state revenue each year. This reduction in revenue jeopardizes our collective ability to invest in schools, families, and communities across this state. It is time to take a hard look at the usefulness of this costly tax break that predominantly benefits the wealthiest Montanans.

Capital gains are profits from the sale of stocks, bonds, real estate, art, antiques, or other assets. These profits are usually not taxed until they are “realized,” that is, until the asset is sold. This means that a stock or vacation home can become more and more valuable, but the investor will not pay taxes on the appreciation of that asset until it is sold. The capital gains are calculated by taking the difference between the original purchase price and the price at the time of sale. The assets owned by everyday Montanans – houses and retirement income – are generally exempt from taxation when sold.

In 2003, the legislature passed Senate Bill 407, which created the capital gains credit, and also instituted other tax cutting provisions.[2] The credit lowered the effective tax rate on capital gains by giving a nonrefundable credit starting in 2005. 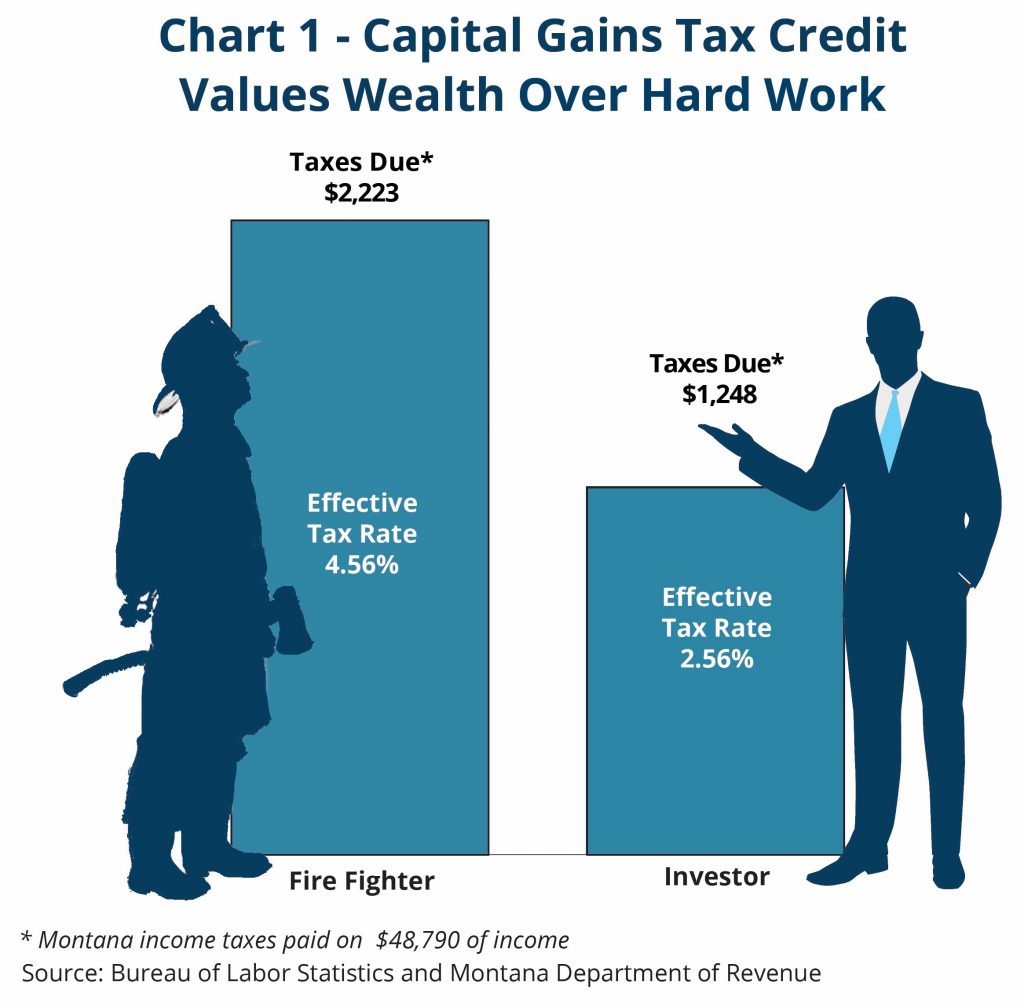 Additionally, profits from capital gains have increased significantly since 2001. From 2001 to 2005, capital gains income by Montana taxpayers almost doubled, to over $1.5 billion.[10] The vast majority of that growth (nearly 77 percent) accrued to the wealthiest 10,000 households, with average household income of $362,000 annually in 2005.[11] While capital gains income has increased over the past decade, the state loses out on its full opportunity for needed additional revenue as a result of the capital gains tax break.

The capital gains credit has proven to be unaffordable and hurts our ability to fund services like education, health care, infrastructure, and clean air and water. When SB 407 passed, the legislature expected the bill to cost $26 million in 2005, the year its provisions went into effect. [12] In fact, the combined tax cuts passed in 2003 cost the state $100 million in 2005.[13] In a little more than a decade, Montana has lost approximately $976 million in revenue, from the tax cuts from 2003.[14]

A major portion of the continued revenue loss is attributed to the capital gains tax credit, primarily benefiting the wealthy. While earnings through capital gains dipped during the recession, these earnings have grown significantly since 2009, representing a significant loss in revenue year after year.[15] In 2017, the state lost almost $50 million in revenue as a result of the capital gains tax loophole.[16] This level of revenue could have covered the general fund contribution for FY19 for the Child and Family Services division of the Department of Health and Human Services which includes child protective services, child abuse and neglect services, prevention services, domestic violence, and other programs designed to keep children safe and families strong.[17]

Tax credits are an expense to the state; giving people who sell assets a tax break means the state collects less money. However, unlike the cost of spending on public services which is more stable and benefits everyone, the cost of the capital gains credit to the state is difficult to predict, impossible to control, and benefits only a few. For example, when Montana decides to invest in higher education, the legislature decides the amount the state contributes to universities, community colleges, and technical training centers. In contrast, the full cost of the capital gains credit to the state depends solely on individuals’ decisions to buy or sell assets and is therefore effectively unlimited.

Economic theory and experience indicate that treating capital gains more favorably than earned income will not help the economy grow and may actually prevent growth in the short-term by forcing state budget cuts.[18] In contrast, rolling back this tax break would restore revenue to help support growth-oriented public investments, like education, work support, and infrastructure improvements.

“Capital gains tax preferences are costly, inequitable, and ineffective. They deprive states of millions of dollars in needed funds, benefit almost exclusively the very wealthiest members of society, and fail to promote economic growth in the manner their proponents claim.”

Furthermore, Montana should create a level playing field for those earning income through wages, thus creating a greater incentive for businesses to invest in the creation of good-paying jobs. The capital gains credit favors investment in capital over investment in labor, creating potential distortions in investment decisions. As Montana faces continued workforce shortages, we cannot afford policies that might further reduce investment in human capital.

In addition, Montana’s capital gains credit does not distinguish between in-state or out-of-state capital investments and therefore does not create incentives to invest in Montana. In fact, taxpayers can claim the credit when they sell the stock of a company that has never done business in our state.

While Montana’s economy has grown over the past decade, research makes it clear that this growth is not a result of tax cuts. The claim of some legislators that supported the 2003 tax cuts for the wealthy that these measures would grow the economy and result in higher revenue is simply not the case. The Montana Department of Revenue concluded, in 2013: “it is unlikely that [the 2003 tax cut] had a significant short-run stimulus effect,” stating instead that the law primarily redistributed tax obligations rather than reducing them.[19] The then-director of the Bureau of Business and Economic Research at the University of Montana stated the data on whether the tax cuts had a statistically significant impact on economic growth was “simply inconclusive.”[20]

In an analysis of the impact of the 2003 legislation, comparing economic growth in Montana to surrounding states, Montana Budget and Policy Center found, at most, negligible evidence that the economic growth Montana experienced over the past decade could be attributed to tax cuts.[21] MBPC measured whether the 2003 tax cuts had a statistically significant change in the actual growth in Montana’s economy by comparing the state’s economy with regional data in such areas as the unemployment rate, income per capita, jobs, wages, or gross state product, several years out.[22] Instead, Montana continues to lose nearly a hundred million dollars in revenue each year that could instead be invested in our local communities.

Because tax breaks on capital gains benefits a small percentage of the wealthiest households, who are more apt to save this money than spend it in local economies, studies show very little economic impact of these tax cuts. Mark Zandi, chief economist of Moody’s Analytics has noted that efforts to provide tax cuts for capital gains income provides one of the lowest impacts on economic growth, as compared with improving policies that help low- and moderate-income families.[23] Dozens of highly credible economic studies around the country show that there is little connection between cuts in individual income taxes for the wealthy and economic growth in either the short or long run. A comprehensive review conducted by the Center on Budget and Policy Priorities noted that of the 15 major academic studies on income tax cuts conducted since 2000, over 75 percent found no significant economic effect of these tax cuts.[24] Since enacting the cuts, most states have actually had slower job growth than the nation as a whole and have seen their share of national employment decline.[25]

Rather than continuing the failed policy of tax cuts, our best opportunity to realize economic growth in Montana is to invest in our communities, through strengthening support for K-12 education, expanding access to post-secondary education and training, supporting families struggling to make ends meet, and increasing good-paying jobs and business growth through investments in public infrastructure. One of the best ways we can ensure adequate state revenue and begin to properly invest in our communities is by ensuring that Montana’s wealthiest households pay their fair share.

Now, more than ever, Montana needs to invest in ways that build our workforce and our economy. Our best opportunity to realize economic growth for all Montanans is through investments in our communities. There are fair and effective ways to raise the revenue needed to pay for these public investments. They include ending tax cuts and loopholes that benefit the wealthiest.

Since its passage in 2003, the capital gains credit has cost Montana hundreds of millions of dollars that could have been invested in schools, families, and communities all across this state. Only a small percentage of Montanans benefited; half of the benefit went to the wealthiest 4,600 households. Meanwhile, the vast majority (over 85 percent) of Montana residents do not receive any benefit from this tax break and instead pay a higher effective tax rate on income from wages. Continuing preferential treatment for capital gains income is unfair to hardworking Montanans who earn their income through wages and salaries. We can no longer afford such a costly credit that benefits so few households.

Taxing investment income like we tax income from wages will help us to create jobs and protect our land, people, and the services that make them stronger.