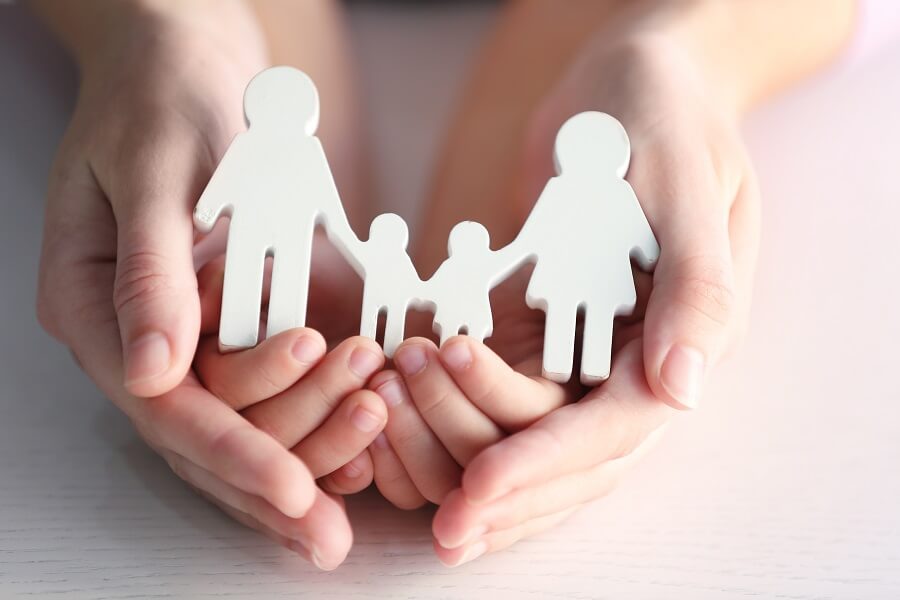 What Is Paid Family and Medical Leave Insurance?

The Montana Family and Medical Leave Insurance Act (the FAMLI Act) would pool small contributions from employees and employers to create a dedicated funding stream for workers when they need time off to care for themselves or a loved one. From these small contributions, representing less than half of 1 percent of wages, eligible workers would receive a portion of their wages while on leave.

Covering as many workers as possible is essential to program success, not only to ensure workers get the benefits they need, but also to spread out the overall costs and keep the contribution levels lower.

The FAMLI Act eligibility criteria for both employers and employees matches eligibility criteria under unemployment insurance (UI).[1] In general, the FAMLI Act will cover the vast majority of workers. In order to qualify for FAMLI benefits, the eligible employee must earn qualifying wages under UI benefits and have contributed into the FAMLI Fund.[2] Pursuant to federal law, FAMLI Act would not apply to wages earned under federal or tribal government employment. The FAMLI Act also provides elective coverage for self-employed individuals. A self-employed worker could elect coverage during an open enrollment period and would pay the full employer/employee contribution amount to be eligible for coverage.

What Types of Leave Are Covered?

Under this program, a covered individual can take leave to care for:

Serious health condition is a situation where the individual or family member either requires inpatient care in a hospital or other medical care facility or requires ongoing treatment by a health-care provider.[3]

How Long Can People Take Leave? 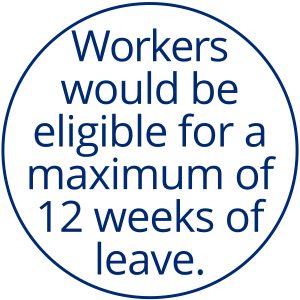 Workers would be eligible for a maximum of 12 weeks of leave benefits in a benefit year. The leave does not have to be taken all at once and can be split between more than one qualifying reason.

Who Counts as Family?

Family member is defined to include a spouse, child, parent, sibling, grandparent, grandchild, domestic partner, or a spouse of any of the previously mentioned, or any individual related to the eligible employee by blood or close association that is the equivalent of an acknowledged family relationship. This definition ensures workers are able to care for their family, recognizing that families vary across the state. An inclusive definition of family ensures that workers who face various family circumstances are covered, including those who need time off to care for a seriously ill parent, domestic partner, or sibling.

What Benefits Will the Program Pay?

A covered individual who applies for benefits will receive a portion of their weekly wages, based on income. Wages will be calculated similarly to UI.[4] In order to ensure the program is viable for all workers, workers with the lowest wages would receive a higher portion of their wages. 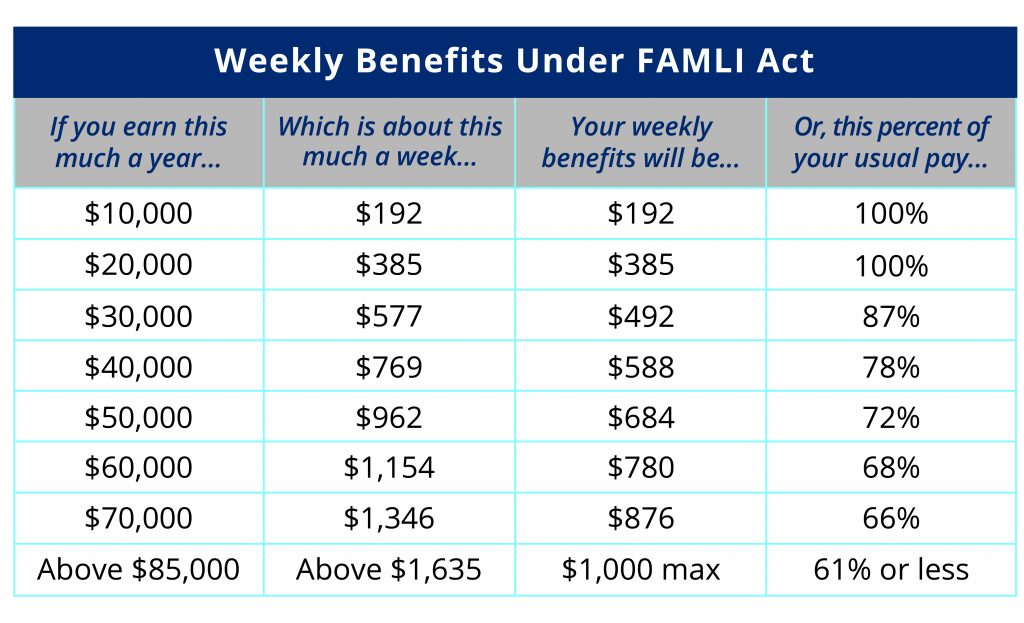 How Does One Apply for Leave?

An eligible individual will need to apply through the Montana Department of Labor and Industry (DLI) in a process similar to applying for UI. DLI may require proof of medical condition and reason for accessing benefits. Once approved, the benefit will be distributed to the qualified individual on a weekly basis. An employer may require the employee to take FAMLI benefits concurrently with a short-term disability or family leave policy under a collective bargaining agreement or employer policy.

How Is the Program Funded?

Contributions will be split equally between the employer and employee. DLI will set contribution rates through rule to ensure solvency of the fund, but those total contributions cannot exceed 1 percent of employee wages. The contribution rate would apply to a worker’s wages up to the base wages amount (approximately $85,000), at an amount consistent with the maximum weekly benefit level of $1,000.

In a comprehensive analysis by the Montana Budget & Policy Center, using similar eligibility and benefit criteria and a study of take-up rates seen in existing statewide family and medical leave insurance programs, contributions are estimated to be less than half of 1 percent of employees’ earnings.[6] These contributions would cover the annual benefits paid out in a benefit year, estimated to be approximately $65 million in the first year.[7] 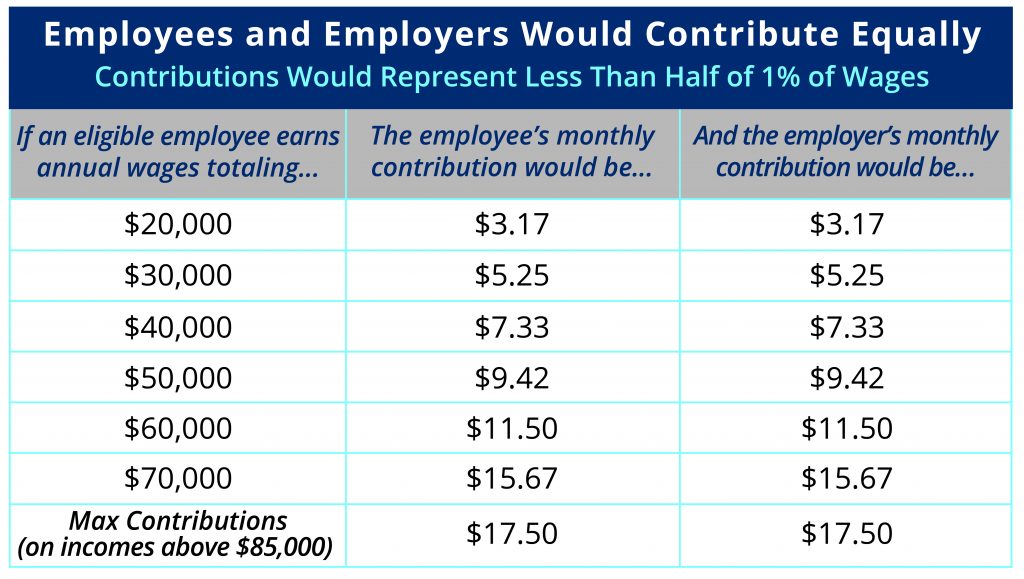 How Will the Elective Coverage for Self-Employed Individuals Work?

How Does Investing in Paid Leave Benefit Working Parents in Montana?

Paid leave helps parents remain financially secure while balancing home and work demands. Access to paid leave increases the likelihood that women will return to work after leave, enabling them to earn more over their lifetime and progress in their careers.[9]

How Does Investing in Paid Leave Benefit Older Workers and Adult Caregivers?

As our population ages, caring for an aging family member is a growing responsibility. In Montana, 1 in 4 four Montana workers are 55 years or older, and 114,000 people are responsible for caring for an adult family member, like spouses and aging parents.[10],[11] Paid leave would help them remain financially secure when they care for seriously ill family members.

How Does Investing in Paid Leave Benefit Businesses?

Growth in Montana’s labor force will slow over the next several years as 100,000 workers approach retirement and too few skilled workers move into jobs.[12] Paid leave helps businesses attract and retain skilled workers and allows small businesses to compete by providing employee benefits packages. Employers with paid leave experience reduced turnover costs. In Montana, retaining one employee in a year could save an employer up to $13,611.[13] In states with paid family and medical leave programs, employers have experienced improved worker attitudes and productivity and almost no abuse of the program.[14],[15]

How Does Investing in Paid Leave Benefit Montana’s Economy?

Paid leave helps keep workers attached to the workforce and can increase their earnings over their lifetime. In one study, new mothers who took paid family leave were 93 percent more likely to return to their employers and earn more the year after giving birth.[16] In Montana, approximately 13,000 parents faced potential lost wages of about $45 million because of unpaid parental leave taken.[17] Women working for low wages and using paid leave were less likely to need SNAP benefits and reported receiving an average of $800 less in public assistance the year after