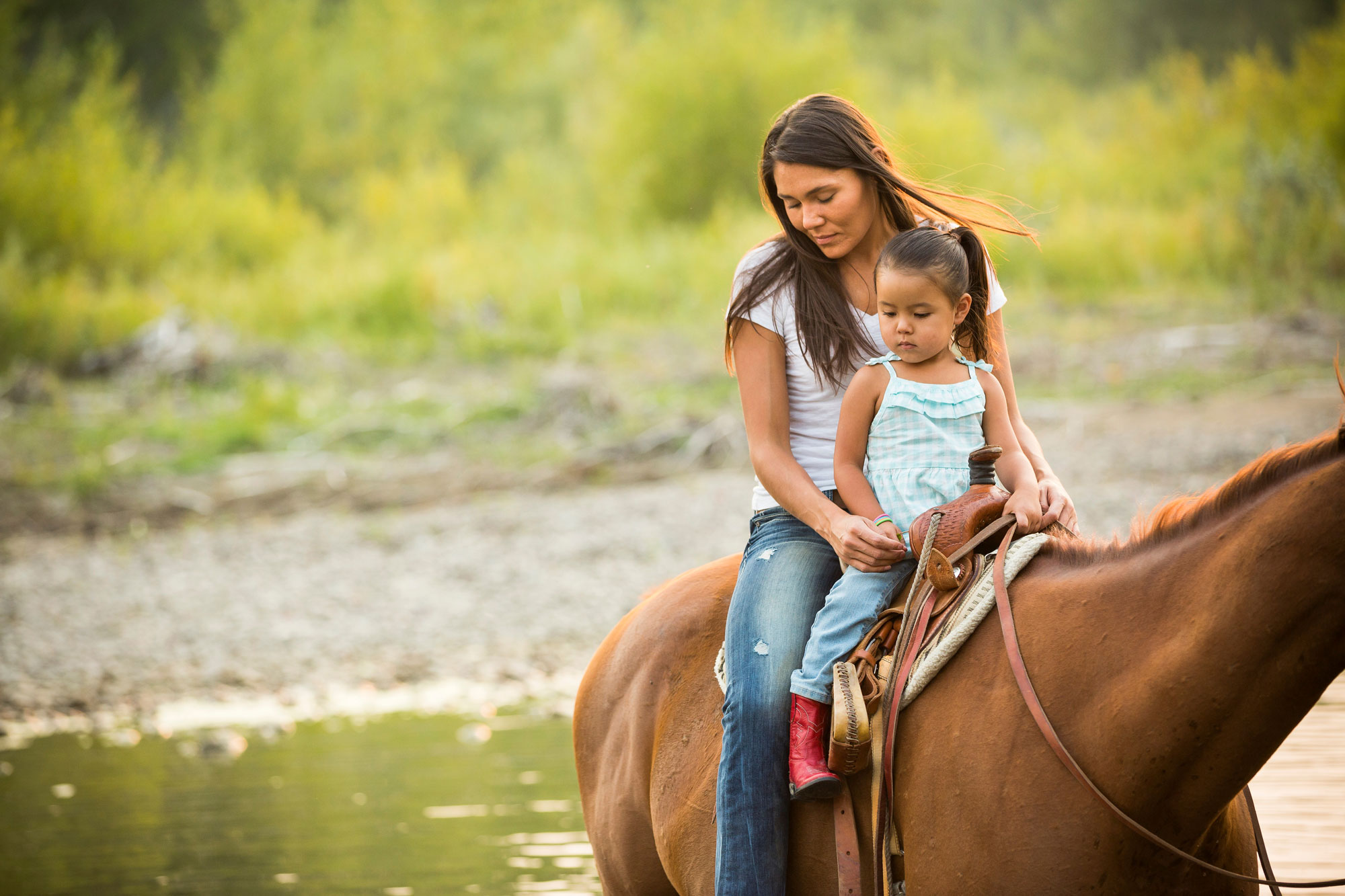 In 2015, the Montana Legislature passed the bipartisan Health and Economic Livelihood Partnership (HELP) Act, extending health-care coverage to Montanans ages 19-64 making less than 138 percent of the federal poverty level.[1] At that time,19,547 American Indians were projected to be eligible.[2] Medicaid expansion was re-authorized in 2019. The program has provided tens of thousands of Montanans with lifesaving and affordable medical care, and helped communities, businesses, and Montana’s economy. As of January 2021, 95,714 Montanans were enrolled and 16 percent of these are American Indians.[3]

The Coronavirus public health emergency has hit tribal communities especially hard. While American Indians comprise 7 percent of the state’s population, they account for 14 percent of cases, and 25 percent of deaths for whom race is known.[4] Due to the United States’ failure to meet treaty obligations, adequate health care has been lacking in Indian Country for generations. The pandemic has laid bare this inadequacy and highlighted the need for improved access to health care through Medicaid expansion.

As a result of the expansion, 15,286 eligible American Indians are currently accessing a comprehensive range of health care services at locations across the state.[5] Not only does this have the 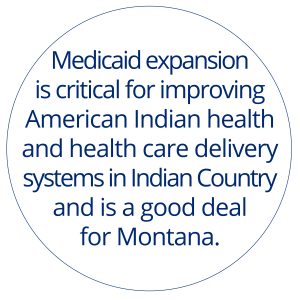 potential to help close the staggering American Indian health disparities gap, but it also brings much needed health care dollars into Indian Health Services (IHS), tribal, and urban health (I/T/U) facilities, which can bill Medicaid for services at their facilities.

Additionally, all services provided at IHS, as well as all services accessed through written care coordination agreements between IHS and non-IHS providers qualify for 100 percent federal reimbursement and therefore are provided at no cost to the state Medicaid program. Medicaid expansion is critical for improving American Indian health and health care delivery systems in Indian Country and is a good deal for Montana.

In 2009, prior to Medicaid expansion, Montana ranked first among states with the highest number of uninsured American Indians.[6]

IHS provides health care services to 2.6 million American Indians and is organized into 12 regions, each administered by an office.[7] The Billings Area Office serves more than 70,000 American Indians in Montana and Wyoming.[8] Services generally consist of primary medical care, though dental and some specialized practice areas are also offered. In Montana, services are delivered through:

Availability of services varies widely from one facility to the next and can be delivered either directly at I/T/U facilities or through services purchased from private providers, which are referred to as Purchased/Referred Care (PRC).[11] PRC enables IHS beneficiaries to access care in instances when a local IHS facility is incapable of providing it.[12] IHS is not a health insurance program, however, and American Indians cannot receive health care outside of I/T/U facilities without incurring a cost for services provided.

While individuals are eligible for direct care services at any IHS facility if they are a citizen or descendent of a citizen of a federally recognized tribal nation, eligibility for PRC services is much stricter. Individuals must reside within a contract health service delivery area and be a citizen of the local tribal nation on whose reservation the referring IHS facility is located.[13] Further, there must be dollars available in the local IHS budget to cover the cost of those services.

The Indian Health Service Has Provided Health Care Since 1955

The obligation of the federal government to provide health care to American Indians stems from what is known as its trust responsibility to tribes. Between 1778 and 1871, the United States negotiated over 400 treaties with American Indian tribes. Through these treaties, tribes ceded control of billions of acres of their homelands to the U.S., in exchange for compensation that oftentimes included medical services like providing tribes with doctors and hospitals. It was not until 1921, however, that Congress passed the Snyder Act codifying the federal government’s trust obligation to “protect” or ensure that the widespread health and welfare needs of all American Indians in the U.S. were being met.

Congress created the Indian Health Service (IHS) in 1955 when they authorized the transfer of all Indian health-related facilities and management functions from the Interior Department to Public Health and Human Services. Two decades later, in 1976, Congress passed the Indian Health Care Improvement Act (IHCIA) “to implement the Federal responsibility for the care and education of the Indian people by improving the services and facilities of Federal Indian health programs and encouraging maximum participation of Indians in such programs.”

IHCIA amended the Social Security Act of 1935 to allow reimbursement by Medicaid and Medicare for services provided to American Indians in IHS or tribal health care facilities. This was critical since many American Indians lived in rural locations so traveling to urban centers for health care providers that accepted Medicare and Medicaid was often unfeasible. IHCIA also provided for 100 percent Federal Medical Assistance Payments (FMAP) for services provided through IHS or tribal facilities. Additionally, IHCIA mandated that all third-party revenue collected by an IHS facility remain with that facility to help meet local needs like purchasing new equipment and supplies, hiring more providers, and funding additional services. Since 1976, IHCIA has been temporarily reauthorized and amended multiple times before being made permanent in 2010 by the passage of the Patient Protection and Affordable Care Act. 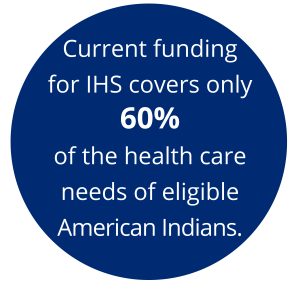 Due to severe and chronic underfunding of IHS, direct services are restricted by limitations on medical supplies, equipment, and medical staff. The IHS manual notes that all services are provided “as available at IHS facilities or on a contractual basis when PRC funds are authorized,” but “limitations of funds, facilities, or staff may result in services not being available to all persons who come within the scope of the program.”[14] Services obtained under PRC are limited as well. Life-or-limb illnesses and injuries are given the highest priority and are often the only referrals approved.

However, even high-priority referral requests cannot be approved once funding has run out. In some years, funding runs out mid-fiscal year, forcing individuals to forego needed health care.[15] IHS has acknowledged that this “renders the PRC program to authorize care at restricted levels and results in a rationed health care system.”[16] Additionally, IHS pharmacies generally do not carry all medications, only those proven to be most cost-effective.[17]

Although funding for IHS has increased by 94 percent since 2008, IHS remains severely underfunded.[18] While other federal health programs, such as Medicaid and Medicare receive automatic funding increases to cover the total eligible population, IHS funding is discretionary and is contingent upon an annual appropriation by Congress. Current funding for IHS covers only 60 percent of the health care needs of eligible American Indians.[19] 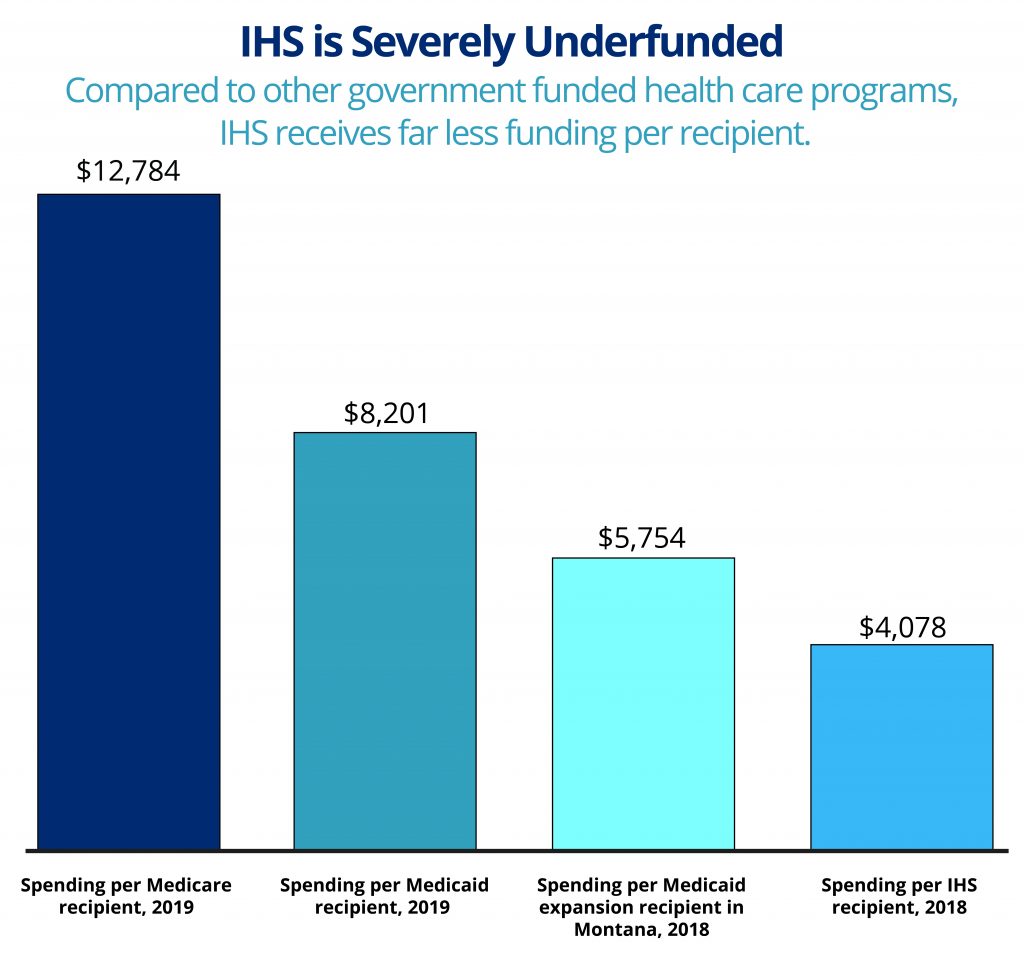 Compared to other government-funded health programs, IHS spends far less per recipient. For comparison, the federal government paid approximately $8,485 per Medicaid recipient and $13,276 per Medicare recipient in 2019.[20] In Montana, the average cost per participant on Medicaid expansion was $5,754 in 2019.[21] The amount spent per person through IHS in FY 2019 was $4,078.[22]

In addition to funding shortages and the resulting limitations on the availability of services, the location of where an eligible American Indian is living plays a role in accessing IHS services. American Indians cannot take advantage of IHS services if IHS or tribal facilities are not located within a reasonable distance from where they reside. Additionally, as noted earlier, American Indians who live off their reservation and outside their IHS’s PRC delivery area often no longer qualify for PRC services.[23] And if they do not reside in one of the five urban centers with an Indian health facility, they will be unable to access health care through IHS. In Montana, 57 percent of all American Indians were unable to access coverage through IHS in 2013.[24]

Compounding this issue is the fact that the majority of American Indians have historically tended not to carry health insurance. Prior to the ACA, private insurance was most frequently 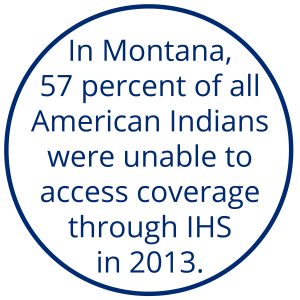 accessed as an employee benefit. In 2013, only 25 percent of American Indians in Montana were able to access health insurance through an employer. [25] Because colonialism has suppressed economic opportunities for American Indians, 32 percent have incomes below the poverty level, and 12.9 percent are unemployed, creating another barrier to accessing health insurance.[26]

Limited access to adequate health care through IHS coupled with a low occurrence of individuals with private insurance has contributed to the staggering health disparities experienced by American Indians today. This includes a highly disproportionate disease burden and a lower life expectancy when compared with all other Americans.[29] Between 2011 and 2015, American Indians in Montana lived 16-19 years less than the rest of the state’s white population, with American Indian men expected to live to age 59 and women to 63.[30]

Medicaid is a critical resource for eligible American Indians who either have no insurance or who are dealing with inadequate care through IHS’s rationed system. Additionally, care is not restricted to IHS’s reservation or urban care facilities, and as with other Medicaid beneficiaries, American Indians can access care at any provider participating in the state’s Medicaid program. However, if services are accessed through IHS or an approved care coordination agreement, the federal government will pay 100 percent of the billed cost with no fiscal impact to the state.[31]

Not only does Medicaid enable beneficiaries to access comprehensive health care, but it also provides them with an important financial safety net. Likewise, if an uninsured tribal citizen living off-reservation is injured and seeks treatment at the nearest clinic, they will be liable for the cost of treatment unless several variables are in place: the patient happens to reside within their reservation’s IHS contract health service delivery area, the IHS happens to have a contract with that particular provider, the IHS is willing to approve the “referral” post-service, and they happen to have available funding to cover the cost. If any one of the variables is not present, the patient will be liable for the bill. But, if the patient has Medicaid coverage, the provider bills Medicaid and Medicaid pays.

Medicaid expansion revenue has allowed IHS facilities to increase their services to American Indians. Additionally, it has enabled IHS facilities to move from a level 1, “life or limb” services prioritization for PRC funds, to a level 4.[32] Because PRC funds have been so limited, in the past, IHS facilities have needed to reserve their use for emergency and acutely urgent care. With Medicaid expansion alleviating some of this pressure on local PRC funds, IHS facilities are now able to dedicate resources to purchasing or referring for health care considered preventative, primary or secondary care, or chronic tertiary care.[33]  This means that American Indians are now able to access critical preventative care that can help reduce health disparities and improve health outcomes including life expectancy. Medicaid expansion funding has allowed facilities to pay for tests that can detect life-threatening diseases, such as cancer.

Likewise, Medicaid expansion has resulted in a significant influx of federal dollars into the state. These federal dollars have paid for medical care that would not otherwise be provided or would be provided at state, local, or private expense. In 2019, $138 million in Medicaid funding went to IHS and tribally operated facilities, 40 percent of which was payments for expansion enrollees.[34]

Additionally, in FY20 the HELP Act paid for more than $800 million in health care services, with over 90 percent of the cost covered by the federal government.[35] Medicaid expansion has brought new federal funding into Montana, boosting Montana’s economy through increased spending by hospitals, providers, employers, the state, and individuals on health care services.

Because of these enormous benefits to American Indians and Montana, MBPC urges Montana legislators to protect and support Medicaid expansion. Montana cannot return to a time when people lacked affordable and accessible health care. Montanans living on low incomes and eligible American Indians must be able to continue to access the type of health care for our state to move forward.