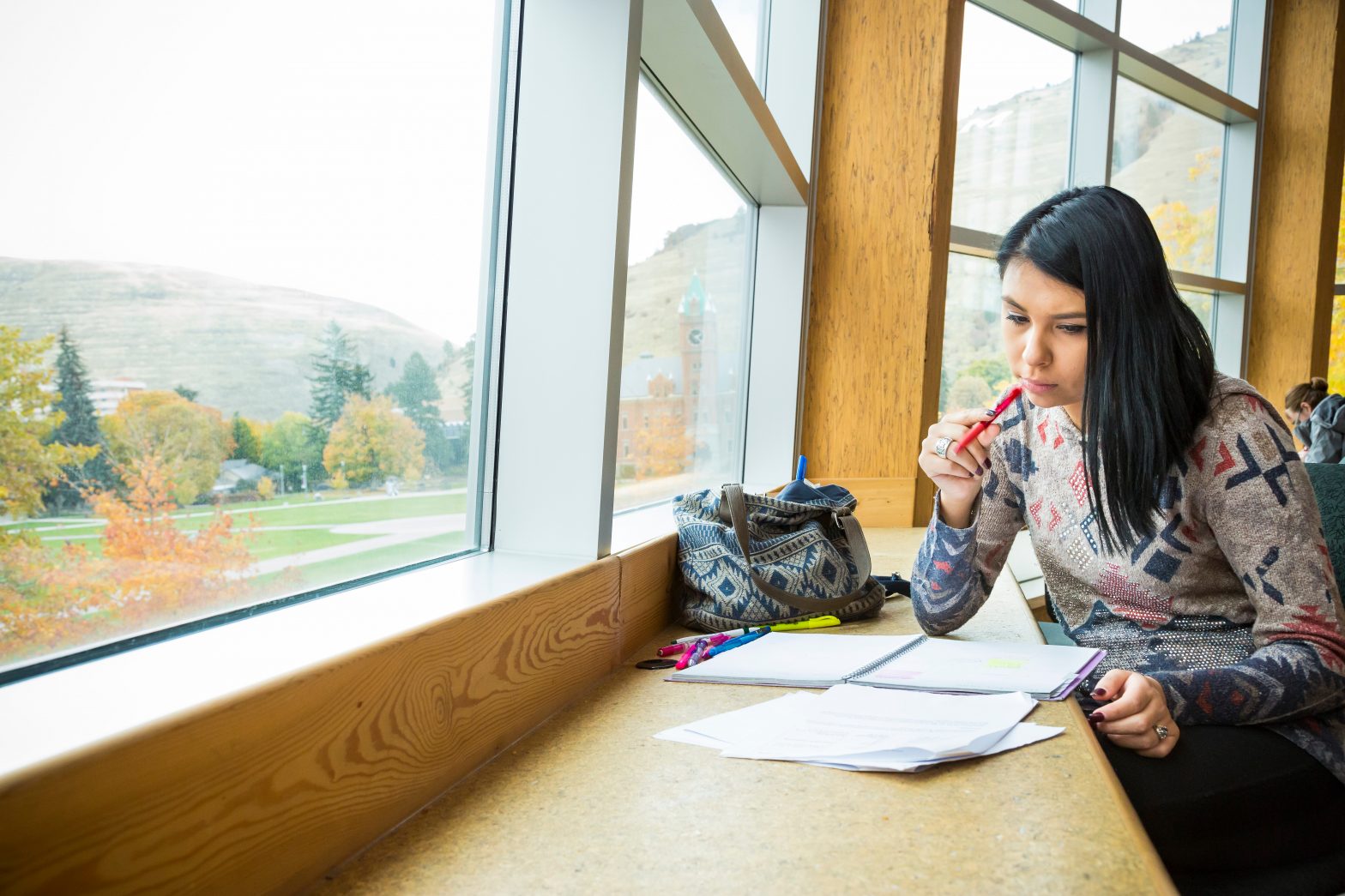 Tribal colleges are critical in providing many Montanans, Indian and non-Indian, with a pathway to higher education and the ability to prepare for the workforce. Tribal colleges also provide rural communities with jobs and contribute substantially to the economic health of our state. Montana should continue to prioritize its investment to support students attending tribal colleges. 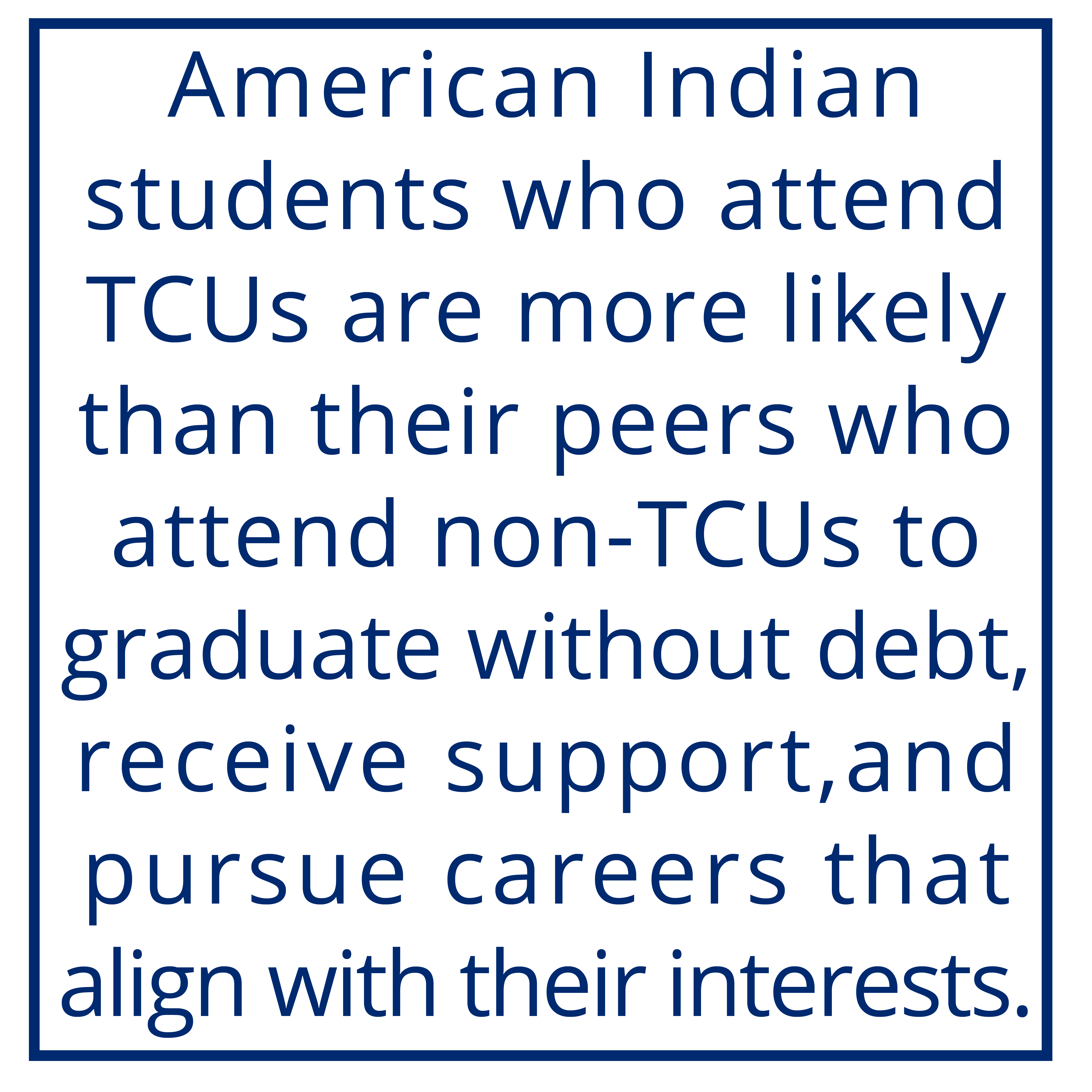 access to opportunity through quality, affordable education. Student demographics include those who are older, have children, and come from households with lower incomes.[3} TCUs are an accessible, affordable option for students and families. Due to their modest size and structure, TCUs provide their students with an affordable education that includes the personal attention needed for student success. In fact, American Indian students who attend TCUs are more likely than their peers who attend non-TCUs to graduate without debt, receive support, and pursue careers that align with their interests.[4]

Over the past few years, tribal colleges have increased their academic offerings to reflect both the needs of their local communities and broader job markets. For example, many tribal colleges now offer degrees in information technology, business management, and entrepreneurship, as well as health care-related professions, like nursing and psychology. Because of this, tribal colleges serve as a stepping stone for graduates who go on to earn their bachelor degrees and graduate degrees at Montana’s universities. To this end, tribal colleges have developed coordinated agreements with colleges in the Montana University System (MUS) so that students can successfully transfer to a MUS school or access online courses to meet their academic and career needs. For 2019-2020, 86 American Indian students transferred from one of the seven tribal colleges to a MUS school.[5] 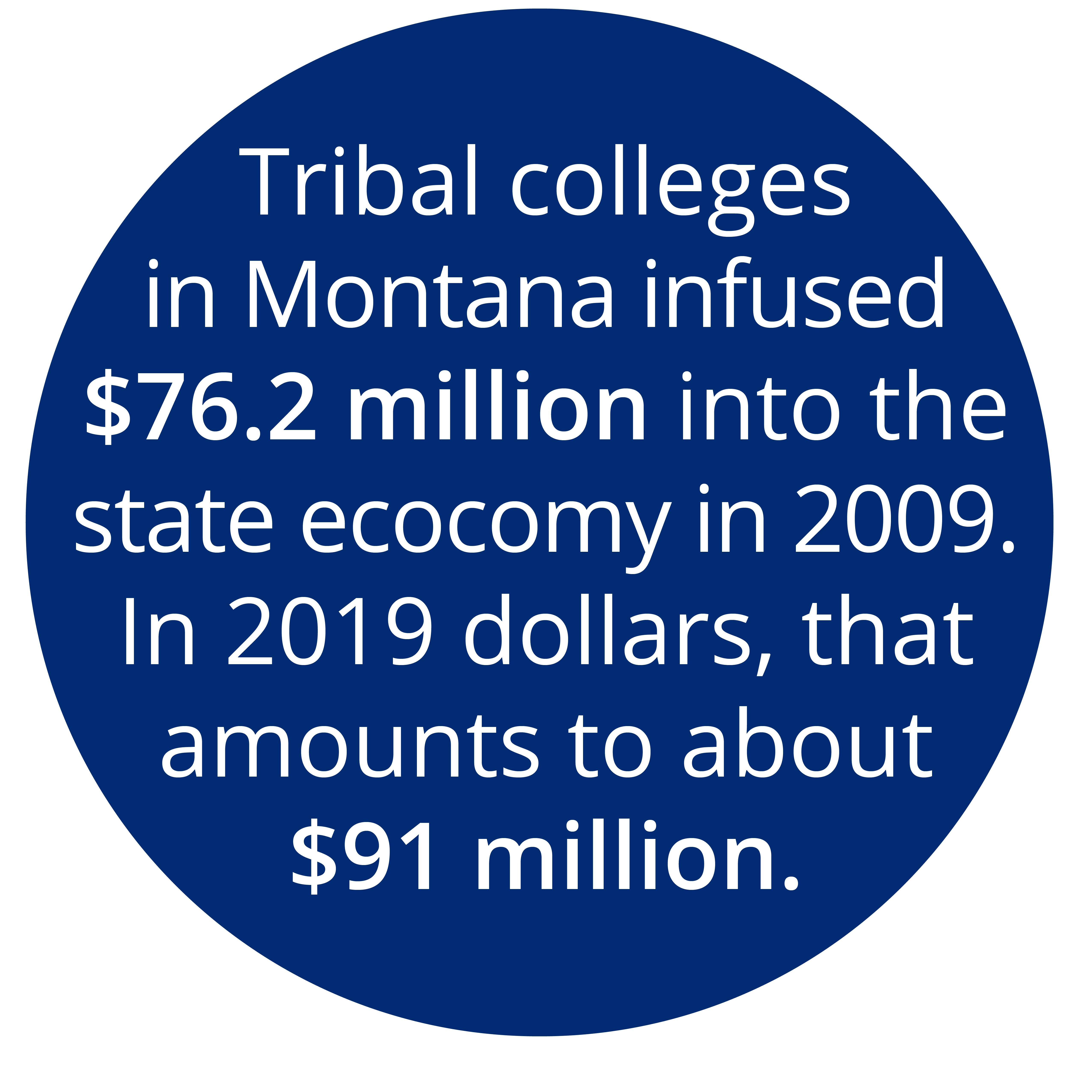 According to a recent economic analysis, tribal colleges in Montana infused $76.2 million into the state economy in 2009.[6] In 2019 dollars, that amounts to about $91 million.[7] Tribal colleges create jobs for faculty and staff, as well as for students upon graduation.  Many of these jobs are in rural communities, where they are especially needed. These jobs increase the amount of consumer spending and improve the economic activity in the rural communities where tribal colleges are located. Tribal colleges also stimulate local and state economies when they purchase goods and services that support their daily functioning.

Individual studies confirm that tribal colleges create a significant positive net impact on the local, state, and even national economies.[8] For example, during the 2013-2014 school year, Aaniiih Nakoda College spent $3.3 million on employee payroll and benefits and $4.4 million on goods and services. Combined with student and alumni spending, this generated $21.6 million – equal to roughly 13 percent – of the total gross regional product of Blaine County. This economic contribution was the equivalent of creating 461 new jobs. [9] For comparison, the total working-age population (those age 15 through 64) of Blaine County in 2014 was 4,018.[10] Because of their Aaniiih Nakoda College education, students see an additional $14.4 million in increased earnings over their working lives, an annual rate of return of 20 percent on the cost of pursuing their education. For every dollar spent educating students at the college, taxpayers receive an average of $2.30 in return over the course of the students’ working lives. This is an annual rate of return of 6 percent.[11]

Our state benefits when students benefit from a greater earning potential, access to more job opportunities, and careers that align with their interests and goals.

Although tribal colleges get some revenue from charging tuition and fees, their primary funding is federal and comes from Title III of the Higher Education Opportunity Act and the Tribally Controlled Colleges and Universities Assistance Act.[12] While federal law authorizes $8,000 in funding to tribal colleges for each American Indian, or beneficiary, student, the actual disbursement is subject to appropriation. Beneficiary students are those students who are enrolled citizens of a federally recognized tribal nation or are the immediate descendant of an enrolled citizen. As of 2016, tribal colleges received slightly more than $6,700 per beneficiary student.[13] 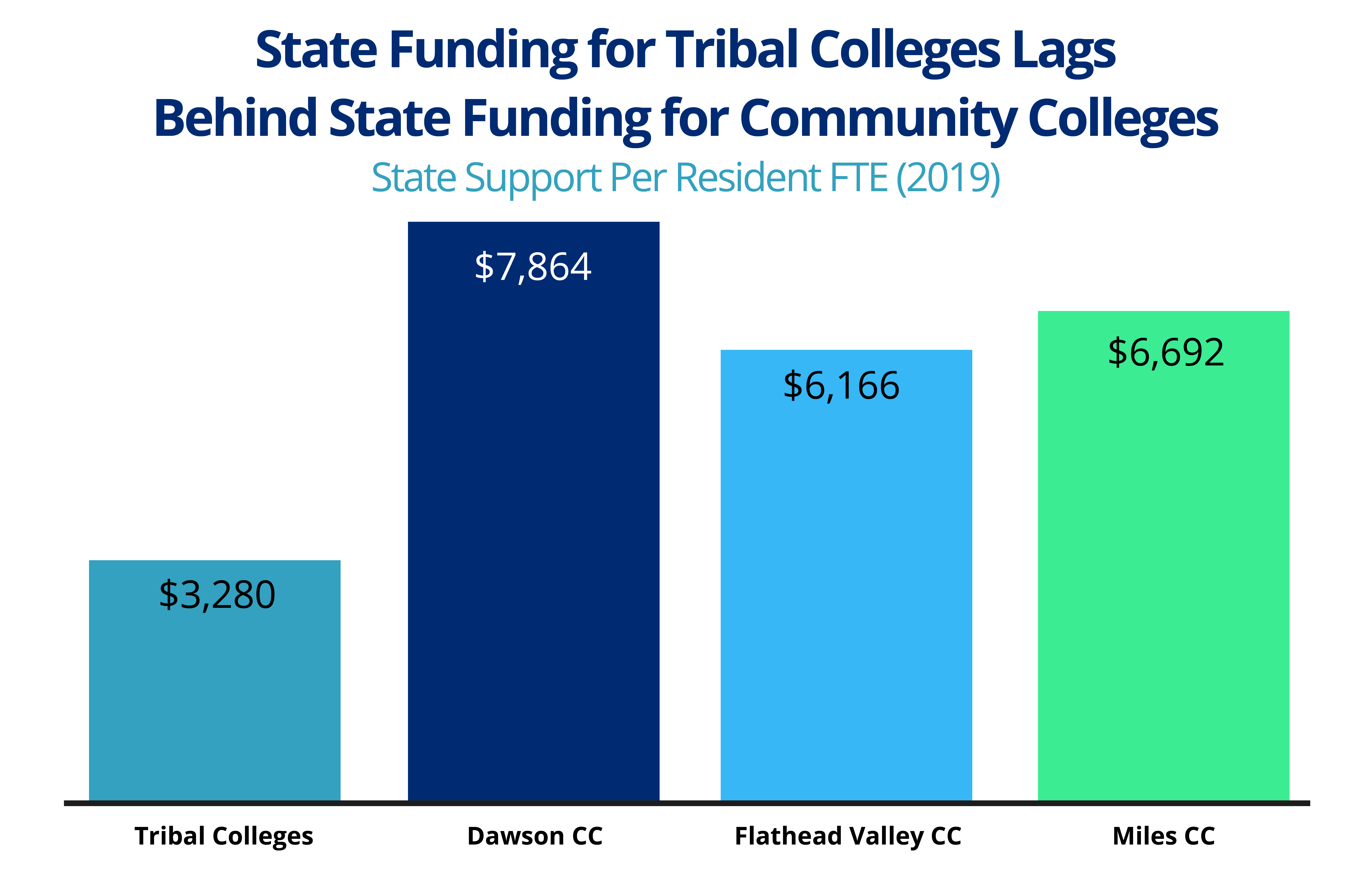 Tribal colleges enroll a significant number of nonbeneficiary students, or those students who do not meet the beneficiary description.[14] In 2018, non-Indian students made up a varying portion of enrollment at tribal colleges in Montana – as low as five at Little Big Horn College and up to 183 at Salish Kootenai College.[15] Tribal colleges do not receive federal support for these students and are left to absorb the cost in their budgets.[16]

In 1995, the Montana Legislature responded to this funding shortfall by passing House Bill 544, appropriating $1.4 million to go towards reimbursing tribal colleges for the education of resident full-time nonbeneficiary students. This investment is now known as the Tribal College Assistance Program (TCAP). In 1997, the Legislature passed Senate Bill 84, making TCAP permanent; the funding distribution, however, remains contingent upon a line-item appropriation.[17] As of 2016, Montana is one of just three states that provides state funding for tribal colleges.[18]

Despite this investment, funding shortfalls of tribal colleges remains an issue. In 2019, the Legislature funded TCAP for the biennium at a level of roughly $2 million, including a one-time-only increase of $350,000 for tribal colleges to help students prepare for and complete the HiSET exam, a high school equivalency test. For comparison, the Legislature provided the three community colleges in Montana with nearly $27.5 million in funding for the biennium.[19] Current state law caps the maximum annual TCAP reimbursement at $3,280 per enrolled nonbeneficiary student. Again, distribution remains contingent upon a line-item appropriation.[20] In 2019, state support per resident full-time student was $7,684 at Dawson Community College, $6,166 at Flathead Valley Community College, and $6,692 at Miles Community College.[21]

The 2023 biennial executive budget requests $1.68 million for the Tribal College Assistance Program.[22] As Montana legislators navigate tough budget decisions this coming session, they should consider the contributions tribal colleges make to our state. The return on investment in these institutions is one of the soundest we can make. The Legislature should: