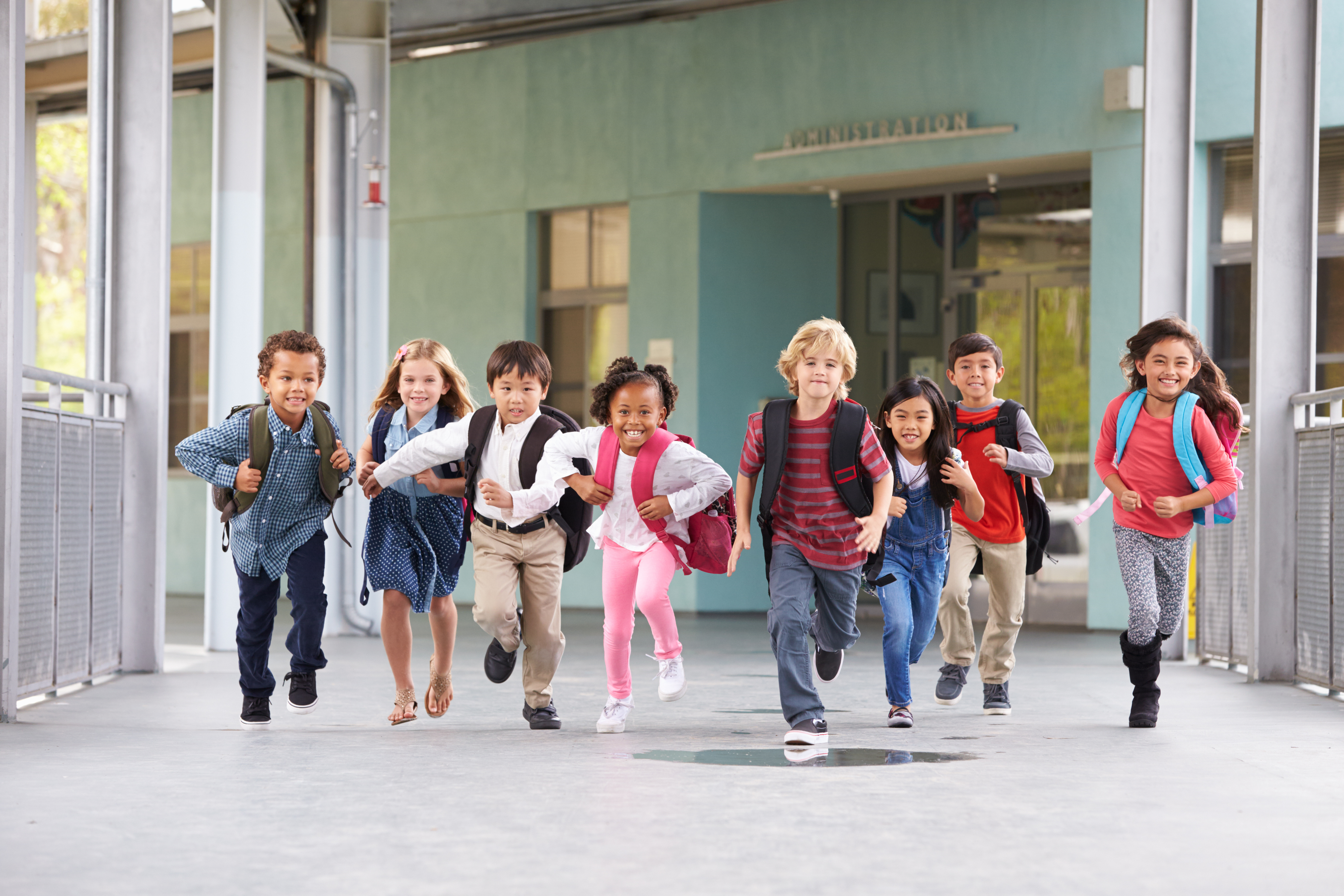 Montanan’s Constitution states that “the legislature shall provide a basic system of free quality public elementary and secondary schools.” Our strong 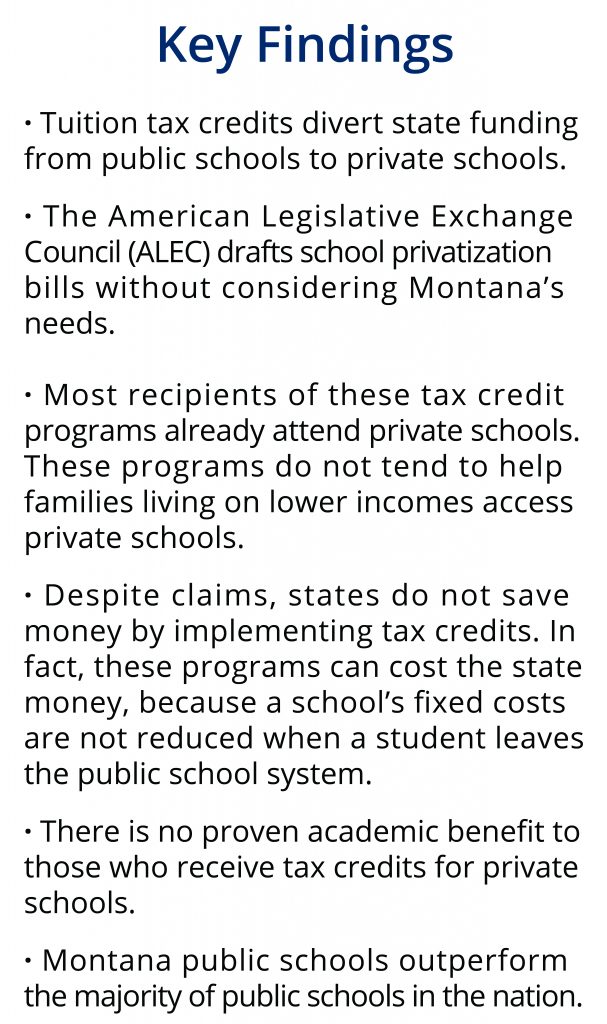 public school system provides opportunities for children across the state, allows flexibilities for locally elected school boards to adapt curriculum to the needs of the communities, and helps create a well-educated workforce.

Tuition tax credits do not enhance our public education system. Instead, they divert funding from public schools, are expensive, and ultimately harm students and communities. In Montana, tuition tax credits reduce the Legislature’s ability to find state-based solutions for improving our education system and make it more difficult for our public schools to provide top-notch education to the wider community.

Montana’s public schools are competitive nationally. Montana scores in the top half of states for mathematics, reading, and science.[1] A large majority of Montana students graduate, with a graduation rate of 86.6 percent.[2] Montana spends $932 less per student than the national average.[3] This reflects an efficient and quality public education system.

Montana’s public schools are innovative and adaptive. Montana offers many options to personalize children’s educational opportunities based on their needs and interests, including curriculum and career paths, advanced placement, and distance learning courses. Advanced Placement (AP) courses have increased significantly in the last few decades, with the number of students participating in AP programs increasing by 232 percent since 2000.[9] Privatizing education only draws funding away from a successful public education system. 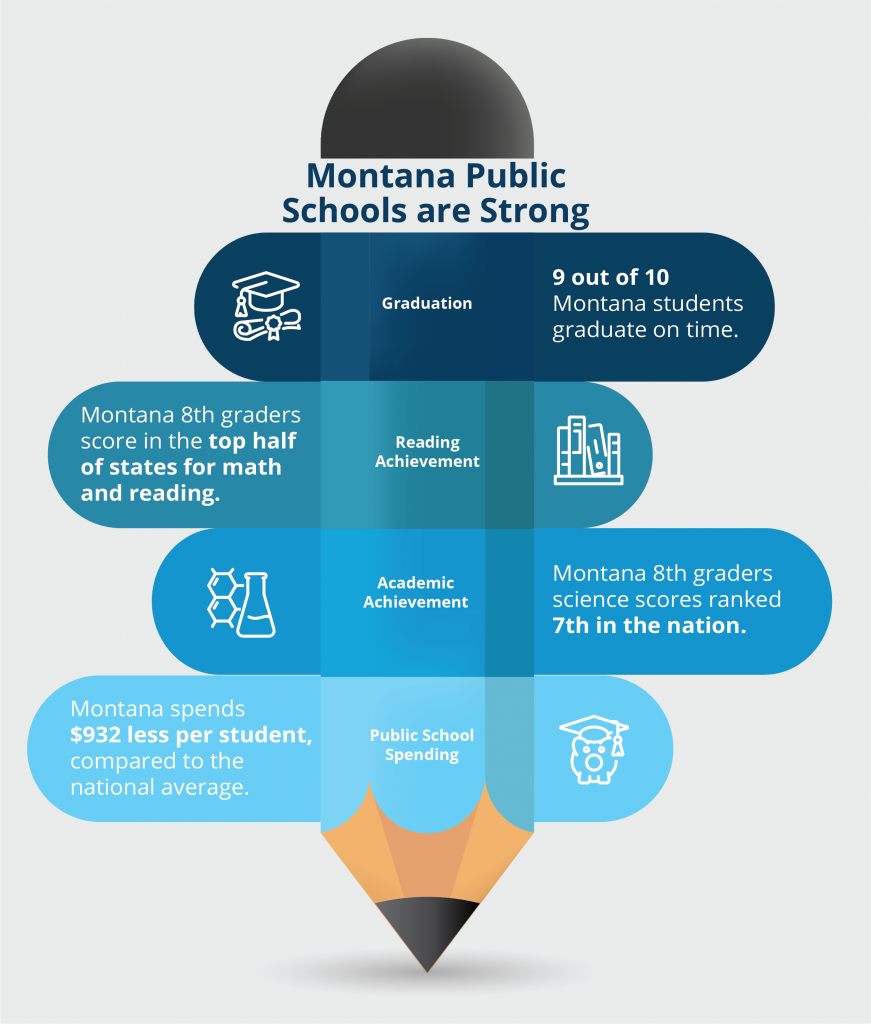 In 2015, the Montana Legislature passed the qualified education tax credit for contributions to student scholarship organizations.[10] This tax credit, although small, is the first of its kind in Montana, allowing public dollars to be diverted to private education. The credit allows taxpayers to avoid up to $150 in taxes on their contributions to private schools. In the first two full years of implementation, this tax credit cost the state about $30,000 a year, and that amount is likely to increase over time.[11],[12]

Montana is not alone in school privatization legislation, and these proposals are not coming from local or even state needs. They begin with a national organization working to pass conservative policies in states across the nation, the American Legislative Exchange Council (ALEC). ALEC is a driving force behind school privatization legislation, and many bills based on ALEC models are proposed in Montana.[13] Part of ALEC’s “limited government” agenda includes the privatization of public education through tax credit scholarship programs, school vouchers, and charter schools.[14] ALEC has model legislation related to school choice topics, which does not factor in Montana’s strong public education system or address Montana-specific challenges and opportunities.[15]

The following types of privatization legislation are being pushed in states across the nation:

The 2021 Montana Legislature is beginning to see proposals to promote school privatization. House Bill 279 proposes to increase the qualified education tax credit, passed by the 2015 Montana Legislature, to $200,000 per taxpayer or corporation from its current limit of $150. This bill allows a tax credit for 100 percent of the contribution to the scholarship organization. When 100 percent of the contribution is allowed as a credit like in Montana’s qualified education tax credit, combined with federal tax deductions, some taxpayers actually turn a profit by making a contribution to a scholarship fund.[16]

Tax credits provide no realistic options for addressing the educational needs of rural students. More than half of Montana’s 56 counties do not have any private schools, and two-thirds of the private schools in Montana are located in the seven counties with the largest population centers in the state.[17] 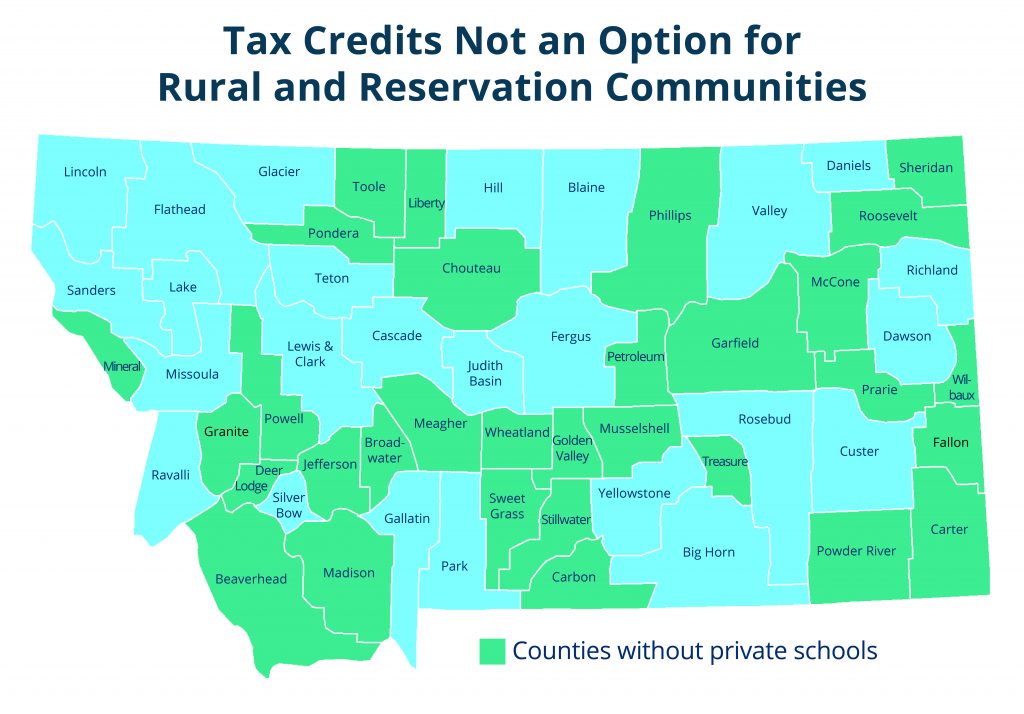 Although nonrefundable tax credits reduce an individual’s income tax liability, they also leave out families with lower and moderate means. Nonrefundable credits are more beneficial to wealthier individuals and families, as families living on lower incomes may not be eligible to claim them. For example, a three-person household with $100,000 in income would be able to claim the entirety of a $1,000 non-refundable tax credit, while a single parent working full time at minimum wage would only be able to claim approximately one-tenth of the full tax credit.[19]

Tax credits for private education divert public funding from public schools, forcing the majority of Montana’s schools to do more with less. Tax credits cost the state money, and if left to grow, risk forcing schools to survive on smaller budgets. Schools have two types of costs – variable costs, such as computers, which change based on the number of students, and fixed costs, like building maintenance and utilities, which do not change. When students transfer out of a public school, that school’s variable costs may decrease, but their fixed costs do not. A school cannot eliminate a teaching position if one or two students switch schools. This has been an ongoing concern in rural Montana. As communities get smaller, so do class sizes. However, a grade with a handful of fewer students does not mean that the school heating and electric bill is less. There would need to be a significant migration of students away from public schools to decrease overall operating costs. In short, tax credits continue to pose additional hurdles for school districts and further drain public school funds of the funds they need to provide the best education to the students.

Furthermore, the data shows that the primary users of such tax credits are students who would have attended or already attend private schools, regardless of whether or not their parents received a tax credit. Thus, money is redirected from the public school system to fund the private school tuition that parents can already afford. For example, in Arizona, only 5 to 15 percent of students receiving tax credit scholarships were newly enrolled in private schools.[20] Even in Georgia, which limited scholarships to previously enrolled public school students, the money flowing through the scholarship funds benefitted the families who donated that money, as opposed to increasing private school enrollment of students struggling within the public school system. Even after Arizona enacted tax credit scholarships in the late 1990s, the state lost about $4,000 for every student that used the scholarship to transfer. In the first three years of the program, Arizona saw a $74.3 million loss in state revenue.[21] Since the program did not cause a large number of students to leave public schools, Arizona saved no money. Instead, the state footed the cost of tuition for those already able to afford private school.[22]

States that implemented tax credit programs have not met their goals of saving money or increasing access to educational options for families living on lower incomes. In reality, tax credits divert public funds to private institutions without improving access to high-quality education and reduce the Legislature’s ability to find state-based solutions for improving our education system. Montanans rely on our public education system to provide a quality education for all children. Instead of privatizing our public school system, Montana should focus on measures that continue to improve the public schools already benefiting students in the state.