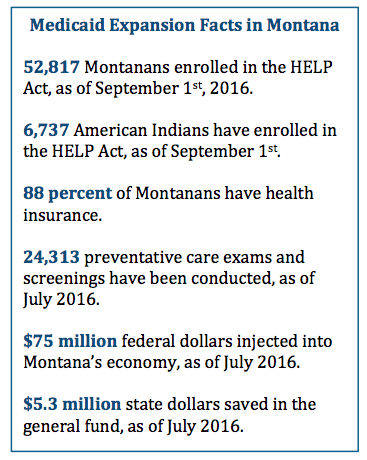 This week, the U.S. Census Bureau is releasing new data on health insurance coverage, economic, and poverty information both at the national and state-level. Today we’ll take a look at what new insurance coverage data means for families in Montana.

Based on the new American Community Survey data, we know that health care reform has increased the number of insured by offering people access to health care coverage through the health insurance marketplace. Through the marketplace, people can easily compare prices and benefits of health care plans. For individuals that make too much to get care through Medicaid, but don’t make enough to afford private insurance through the market place, federal subsidies help them pay their premiums and reduce their out-of-pocket health costs.

Health care reform has also strengthened Medicaid, which is good for families, communities, and states. Medicaid has been improving people’s lives by providing affordable health care that has boosted state economies for the last 50 years. In 2015 Montana became the 31st state to expand Medicaid through the Health and Economic Livelihood Partnership (HELP) Act, expanding coverage to individuals making less than 138 percent of the federal poverty level ($27,700 for a family of three).

Many states that have expanded Medicaid have seen higher enrollment levels than originally anticipated, and enrollment figures in Montana suggest the same. It was estimated that 70,000 additional Montanans would receive health insurance coverage through expanded Medicaid. In July, just six months after expansion, over 47,000 individuals had already enrolled in the HELP act. Overall, expanding Medicaid has helped reduce the number of Montanans without health insurance. Over the past several years, the number of uninsured in Montana has fell by about five percent, from 165,000 uninsured in 2013 to 119,000 in 2015.

Medicaid is a cornerstone of health care for people who struggle just to make ends meet. Thanks to Montana’s decision to expand Medicaid to help more people who can’t afford private insurance, more people are getting the care they need to go to work, take care of their kids, and be healthy, productive members of their community.