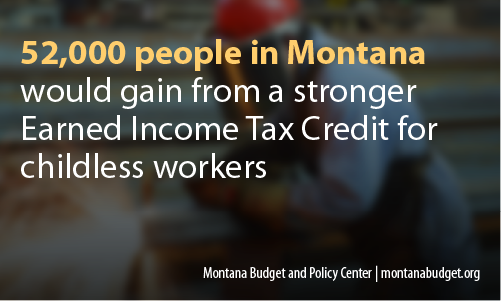 The Earned Income Tax Credit (EITC), the nation’s most effective tool for reducing child poverty and supporting working families, would be strengthened for workers without children in President Obama’s 2015 budget.  Congress should take a serious look at this proposal. Furthermore, working Montana families would benefit from a state credit tied to the federal EITC.

In 2011, 86,646 Montana households received the federal EITC, pumping over $169 million back into the pockets of working Montanans earning low wages.

However, the current EITC provides little to no help for working adults without children.  The President’s budget proposes to double the maximum credit for childless workers to $1000 and lower the age limit to 21.  Under this proposal, 52,000 Montana workers without children would either become newly eligible for the EITC or receive a larger EITC, and see the taxes they pay reduced.

We’ve written before about the benefits of investing in Montana’s working families, by building upon the federal EITC at a state level.  Montana is one of only a few states to impose income taxes on working families living in poverty.  Over 33,000 Montana families are working, but remain below or near the poverty line.

So what would a state EITC mean for Montana’s working families?  A state tax credit set at 20% of the federal EITC could provide Montana low-income working families with a boost in income of up to $1,178.  For a single mother in Great Falls, that income boost could pay for over a month of her child care and transportation costs, so that she can keep working.  A state credit in Montana would build on the federal credit to lift more Montanans from poverty and improve the future for Montana’s children.

The federal EITC has been a success in lifting working Montana families out of poverty. A state credit could work with the federal credit to do even more.  Both Congress and state lawmakers should think seriously about expanding EITC and investing in hard-working Montanans.