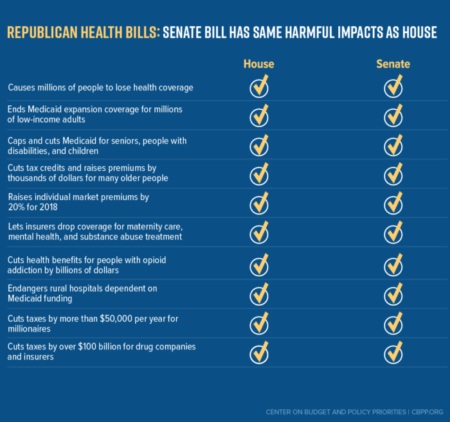 The Senate Health Care bill, released on Thursday, jeopardizes Montanans’ health and well-being by deeply cutting Medicaid, raising premiums for many Montanans, and causing tens of thousands of hard-working Montanans to lose their insurance. The Senate took the deeply flawed House-passed American Health Care Act (AHCA) and “tweaked it.” In some ways, the Senate bill is even worse than the House AHCA.

While details are still emerging about the Senate bill, let’s take a look at the most important provisions, and how they affect everyday Montanans:

Montana’s bipartisan Medicaid expansion program is the first of its kind in the country by utilizing a third-party administrator to provide health care coverage to nearly 80,000 Montanans. The Senate bill will effectively end Montana’s Medicaid expansion program in 2021, by ratcheting down federal matching funds well below what ACA provided. Most of those newly enrolled are working at low wages and will be left with little or no options for affordable health insurance.

Over 216,000 Montanans rely on Medicaid for health care including people with disabilities, seniors, and families with children. Eight in ten Montanans on Medicaid live in working households. Many of these hard-working Montanans, however, work at jobs that do not provide insurance. Despite the outcry over the House’s deep cuts to Medicaid (over $800 billion by 2026), the Senate bill’s cuts are even harsher over the long run than the House bill. Under the House version, Montana is expected to lose $4.8 billion in federal Medicaid funding – 35 percent of its current law funding – between 2020 and 2026. We have yet to see a full analysis of the Senate proposal by Congressional Budget Office, but the bill appears to cut an even greater amount of federal Medicaid funds over time.

Third, the Senate bill would raise premiums and deductibles for thousands of Montanans who buy insurance on the marketplace.

The Senate bill pulls the rug out from under Montanans who rely on the marketplace for reasonable health care coverage. Because Montana is a rural state, health care costs are higher here than in other parts of the country. While the Senate version does take into account income and regional costs of insurance (similar to what ACA does), the level of tax credits and assistance is below that in the ACA for many middle-income Montanans. Insurance costs, especially for older Montanans, would rise sharply under the Senate bill. Montanans would also likely face higher deductibles and out-of-pocket costs under the Senate bill. Approximately 117,000 Montanans rely on the Marketplace for affordable coverage, and many are in danger of seeing their insurance costs rise to unaffordable levels.

Fourth, the Senate bill allows states to strip away important consumer protections for people with pre-existing conditions and others most in need of care.

While the Senate version does not include the House proposal to allow states to waive protections for preexisting conditions, there are a number of other provisions that could have a devastating impact on the over 420,000 Montanans that live with a pre-existing condition. The Senate bill would allow states to waive certain protections, such as the ACA’s requirement that insurance plans limit people’s total out-of-pocket costs, which will disproportionately hurt those with pre-existing conditions. The Senate bill also allows states to waive certain health benefits, including access to, to maternity care, mental health care, or substance abuse treatment. With the opioid crisis spreading across Montana, a bill that reduces access to health care will only make the problem worse.

Because we are still waiting on a CBO score, it’s unclear exactly how many Montanans will lose insurance coverage under the Senate Bill. But make no mistake – this bill, like the one in the House, reduces coverage, increases health costs for many, strips consumer protections, and endangers Medicaid as well as the state’s own finances.

Montana’s senators should not support this bill due to the devastation it would cause for tens of thousands of Montanans. Anything less would break their promise to the people of this state.