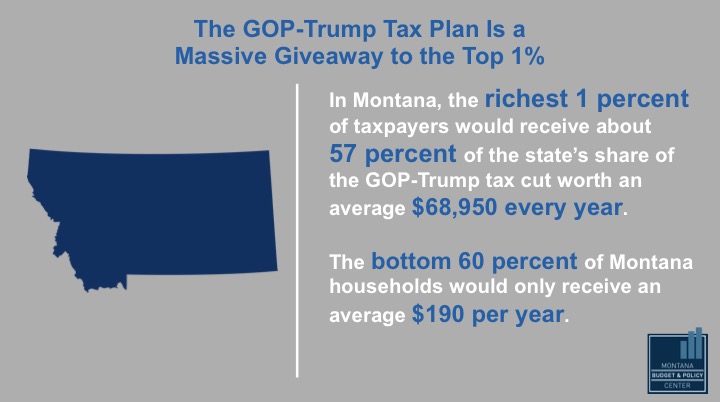 The tax framework announced last week by President Trump and Republican leaders in Congress outlines large tax cuts aimed at the wealthiest households in the country – while offering little benefit for working families who are often struggling to cover day to day living costs.

The GOP-Trump Tax Plan is a massive giveaway to the richest 1 percent of taxpayers and increases the national deficit by $1.5 trillion.

This tax plan is being sold as a “middle-class miracle,” but according to the Institute on Taxation and Economic Policy, it is anything but.

Overall, the richest 1 percent (roughly 5,000 taxpayers) would receive over half (56 percent) of the tax cuts received in Montana. Such enormous tax cuts for the wealthiest would ultimately hurt many Montanans, because the resulting increase in deficits and debt would increase the pressure for cuts in investments across the country that produce long-term economic benefits. Congressional GOP leaders may use deep cuts to Medicaid and Medicare to pay for these tax cuts, gutting programs essential for Montana families and our state budget. It is important to note that approximately 42 percent of Montana’s state budget comes from federal funds.

Average Montana families and communities across the state ultimately stand to lose far more from federal cuts than we would gain from tax cuts outlined in the this new tax framework crafted to benefit the wealthy.

To learn more, see our news release on the tax plan here.

For a more detailed breakdown of how the tax plan would affect Montana taxpayers, go to: http://itep.org/trumptaxprelim/.