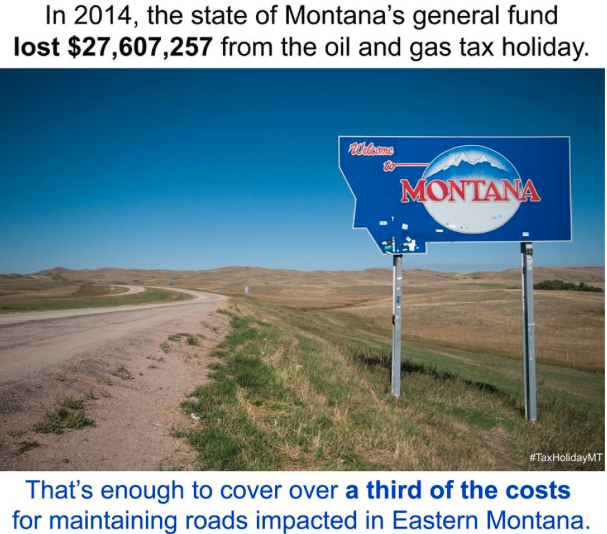 Wednesday is Tax Day! We’re building off of yesterday’s blog post, which examined who pays taxes in Montana. As you know, Montana’s lower-income families tend to pay a higher proportion of their income in taxes compared to higher-income individuals. And you also have heard that Montana actually taxes families in poverty at a greater rate than almost any other state. Today we ask a new question – we pay, why don’t they? Let’s see a few examples of how big businesses in Montana shirk paying their fair share.

In 1999, the Montana legislature created a tax break for oil and gas companies, lowering the tax rate on production (companies are taxed at .76% in the first 12 to 18 months of production, compared to the regular 9% rate). Supporters said a tax holiday would encourage oil and gas companies to expand operations in Montana, stimulating the economy and creating jobs. However, since implementation, it has become clear that the oil and gas industry operates regardless of taxes (they go where the oil is) and the tax holiday has cost the state and our local governments $265 million in lost revenue over the last seven years.

Eliminating the tax holiday altogether, or even setting a trigger price, like the one proposed in SB 374, would ensure that big oil and gas companies are paying their fair share and providing adequate support to the communities most impacted by oil and gas drilling.

Montana’s capital gains tax credit has cost the state millions of dollars and gives preferential treatment to wealthier Montanans. This credit lowers the effective tax rate for individuals who make money from investments compared to those who earn income from wages, effectively encouraging wealth over work.

For example, chart 1 shows the different tax rates paid by a firefighter who earned $41,520 and an investor who made an equal profit from selling assets. With an effective rate of 2.6%, the investor has taxes that are over 40% less than what the firefighter owes.

This credit overwhelmingly benefits high-income individuals in the state because low-and-moderate-income people are more likely to earn income from a job rather than through the sale of investments. In fact, nearly 95% of capital gains credits go to the wealthiest 20% of Montanans.

Montana is one of only nine states that provides this preferential treatment for capital gains, and this measure costs Montana over $29 million in revenue. Reducing or eliminating this credit will help restore revenue streams that are critical for funding education and infrastructure and create a fairer tax system that taxes both investment income and earned income the same.

We have heard a lot this legislative session about lowering property taxes on certain types of property, but this has a real impact on who is paying for our schools and local government services. State and local property taxes make up 40% of total tax revenue in Montana, and Montana homeowners pay nearly half of all those property taxes. Someone must pay for the infrastructure, public safety, and quality schools that we all rely upon. Yet when the legislature cuts property taxes on business, it shifts the obligation to pay for these services more and more onto the backs of homeowners.

Residential Property has Grown as a Share of Overall Taxable Value

Montana can no longer afford to give tax breaks to corporations and the wealthiest Montanans. The argument that tax breaks for wealthy individuals and large businesses spur economic growth and incentivize production is irresponsible. It’s not fair tax policy to require low-income individuals to pay greater shares of their income in taxes than those who are more financially able to do so. It’s time companies and wealthy Montanans pay their fair share.