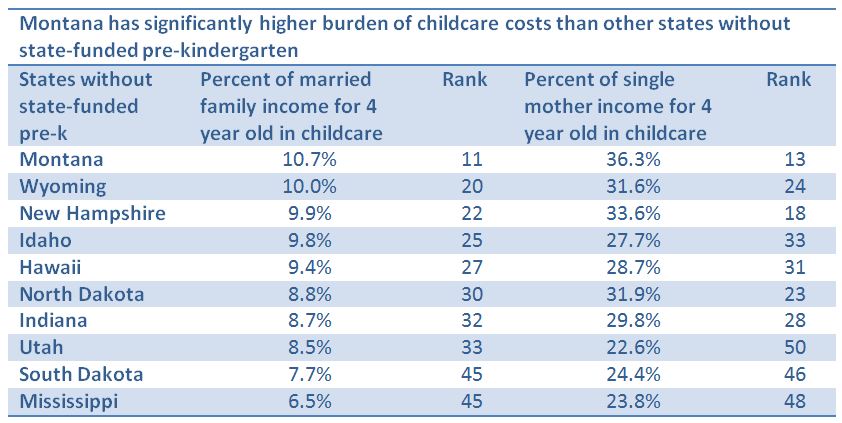 Parents of a college student in Montana can expect to shell out between $6,350 – $6,750 a year in college tuition, depending if you’re a Griz or a Bobcat. But parents with a four year old in full-time preschool might be less prepared for the price tag – $7,518 a year, according to a new study from Child Care Aware.

Despite the numerous benefits of pre-kindergarten for both children and the state, Montana is one of only ten states without any state funding for pre-k. Out of these ten states, paying for child care places one of the highest burdens on Montana parents.

With costs higher than that of a year at college, many parents find themselves spending an unrealistic portion of their income on childcare. Those parents that can’t afford it often are forced to leave the workforce or place their children in substandard care. Parents who want or need to work should be able to afford to do so, and children deserve safe and quality childcare.

Early childhood is a critical time in a child’s life. By supporting state-funded pre-k, Montana could improve the lives of not only children, but working parents as well.

If you are interested in learning more about how state funded pre-k could benefit Montana’s budget, economy, and our children, read our report here.