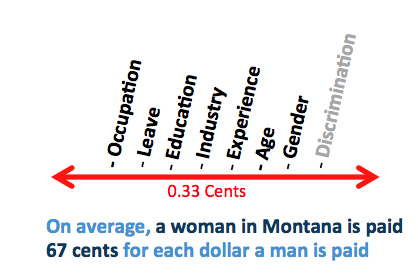 I’m sure many of you have heard the statistic that a woman working in the United States makes 77 cents for every dollar a man makes. This is the wage gap – and as you will learn today – it is more complicated than you may think.

The wage gap, (often referred to as the gender wage gap or gender pay gap), is the average difference between male and female earnings, usually as a percentage of male earnings. Note that when you read these statistics it’s important to be clear about what type of workers are being compared. In Montana, a full-time working woman makes just 76 cents for every dollar a man is paid. When we consider all types of workers (full- and part-time) the wage gap increases. On average, a working woman in Montana is paid 67 cents to every dollar a man is paid. That’s a wage gap of 33 cents!

Today, women work at a higher rate than they did several decades ago, is present in more occupations, and more families rely on mothers’ earnings as a significant share (if not entire) portion of household income.

Researchers have identified “measurable factors” like occupation, leave-taking practices, educational attainment, age, and industry as factors that explain a portion of the wage gap (see graphic below).

Here is the breakdown from the Montana Department of Labor and Industry, on various factors that can help explain the wage gap:

Solutions exist that would enable Montana women to be paid the same as their male counterparts. We should consider legislation that creates transparency in the workplace and help shed light on unfair pay differences between men and women doing the same job. Additionally, paid family leave would help women remain economically secure and employed when they take leave to care for family members.