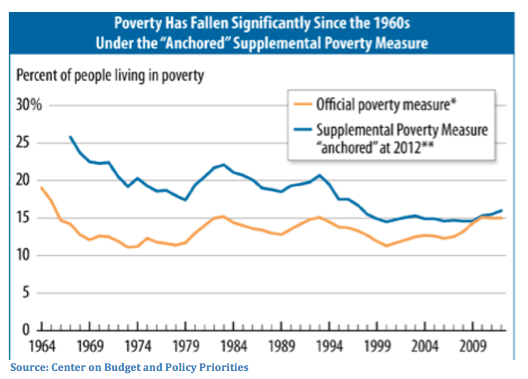 A few weeks ago, we discussed how the Official Poverty Measure has been the standard statistic used to measure poverty in America for the last 50 years. Today, we’ll introduce our second wonky word related to the topic of poverty measurement, the Supplemental Poverty Measure, and discuss why it’s a more comprehensive tool.

The Supplemental Poverty Measure (SPM) was created in 2011 as a complimentary statistic to be used along with the Official Poverty Measure in order to provide a better picture about poverty rates in America. Unlike the OPM, which only looks at a family’s pre-tax cash income, the SPM paints a clearer picture about the actual cash on hand a family has. The SPM assesses a family’s income, excluding expenditures on necessities like food, clothing, shelter, and utilities and expenses like federal and state taxes, transportation, child care, and out-of-pocket health care costs. In effect, the SPM shows what cash a family actually has on hand to make ends meet.

Further, the SPM factors in federal in-kind benefits (like SNAP and TANF cash benefits) and tax credits like the earned income tax credit, all of which help increase a family’s net income and allow them to rise above poverty levels.

So why is the SPM a more comprehensive and appropriate tool to measure poverty today? Statistics are most useful when they can tell a story over time. However, using the OPM alone to understand poverty rates between the 1960s and today is misleading.

The OPM does not take into account any of today’s poverty relief efforts and does not account for different costs of living across the country in the same way that the SPM does. For example, when estimating how many individuals are lifted out of poverty in 2011, the SPM captured about 12,500 more people than the OPM because it accounted for non-cash benefits and tax credits like SNAP and the earned income tax credit, which boost income levels. Therefore, the SPM indicates slightly higher poverty rates in any given year compared to the OPM, but shows greater reduction in poverty rates over time (graph below).

So far, the SPM will not be used to determine eligibility for government programs like SNAP or TANF in the same way that the OPM is. Instead, the SPM will be an additional measure to compliment the longstanding OPM. So the OPM tells us about work and before-tax earnings among low-income families, and the SPM allows us to see whether policies and government programs help families over time. Together they provide a richer insight and hopefully aid in our efforts to alleviate poverty in our communities.