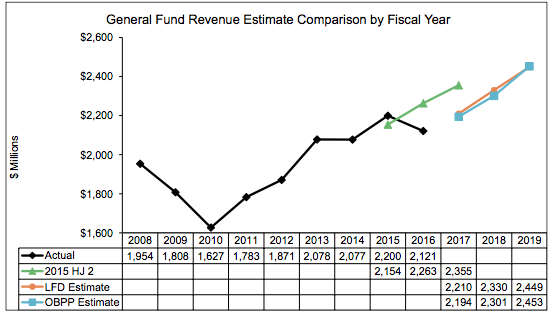 Now that the elections are over, talk around the state will focus on the upcoming legislative session. Things are already heating up with the Governor’s budget release, and the Revenue and Transportation Interim Committee (RTIC) is meeting today to decide on the revenue estimate.

But before we get to what RTIC will decide on the revenue estimate, we thought we’d do a quick “brush up” on the agencies who are providing recommendations to legislators.

These are two agencies that folks should be familiar with as we discuss the budget –the Office of Budget and Program Planning and the Legislative Fiscal Division. The difference between OBPP and LFD can get very confusing, but both are very important when talking about the state budget.

Here is where they are similar.

Both are government agencies housed in the State Capitol. They both provide fiscal analysis on the state budget and provide feedback to Legislators and other interested parties.

Here is where they are different.

The head of the OBPP is the budget director who is appointed by and reports to the governor. The director of the LFD reports to the legislature and does not change when legislative leadership changes. Each is responsible to a different government entity, which can lead to different analysis and conclusions based on the information requested by their respective employers.

Throughout the year, both OBPP and LFD monitor the budget and make note of any changes in revenue or expenses. The LFD reports findings to the appropriate legislative committee and OBPP makes recommendations to the governor on any necessary changes.

Today, both agencies will present their estimates for where revenue will be for the next two years (the 2019 Biennium). Below is a chart that LFD has prepared, which shows where each agency is at in the amount of revenue for the next two years. The differences in their estimates this biennium are not nearly as significant in past sessions. OBPP projects revenue slightly below what LFD is projecting.

While the process and the details can get pretty complicated, the revenue estimate is a critical component for how Montana will invest in our state. The estimate has real implications on families and communities across Montana. Stay tuned as we see how things play out today.